When you start to read a story, do you like to see who the antagonist is early in the story, or do you prefer to work it out over the course of the story? Mystery readers will probably choose the latter, but across the genre spectrum, the majority of stories make the nemesis plain to see within the first couple of chapters.

One of the sort of twists I enjoy as a reader in a lot of stories is finding out that the person who appeared to be the bad guy actually wasn’t, or like George R.R. Martin likes to do to us in his Songs of Ice and Fire series, discovering that an even worse bad guy was lurking in the background and then comes forward.

Taking it a step further, I’ve found myself sometimes leading the audience astray, more in my film scripts than in books (so far!), but presenting a character who appears to be the antagonist until they save the day from the real antagonist who was hiding in plain sight all along! Done right, this can elicit that coveted reviewer statement, “I didn’t see that twist coming!”

I’m not much of a Mysteries reader, but it’s one of the most popular genres because readers love to try to work out a puzzle. This element of Mystery writing can be applied in many other genres. The most recent example of leading the reader down a false route that I’ve read was in Harlan Coben’s The Woods. 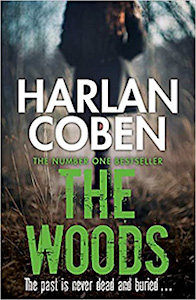 Without giving spoilers (because this story is really worth reading if you haven’t!), the story leads the reader to believe the protagonist’s sister and three friends were all murdered at a summer camp. Some of this might be true. Two of the bodies were recovered after all. The question is, who killed them and where are the other bodies? Did one of them kill the others?

Unravelling these questions is a major factor in the plot. Clues are given that lead the reader towards several possibilities, but all of them can’t be true. It holds attention until the very end.

In at least one story I have on the back burner (as well as a script), this takes it another step further and unfolds so that a specific character appears to be the enemy, but in the end the savvy reader might start to notice that someone close to the protagonist isn’t all they seem. Creating a situation that has the reader guessing is an art that takes practice, but done properly leaves the reader or film audience with a sense of wonder. How did they not see it? 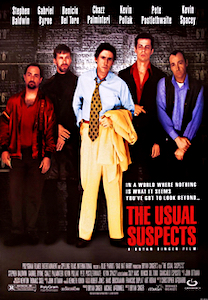 How many of you have seen the film, The Usual Suspects? Did anyone guess the identity of Keyser Söze before the reveal at the very end? That feeling of sudden realisation is an emotional response worth cultivating. It is touching those emotions that makes a reader or film goer want to come back for more!

Sometimes the real Nemesis just comes a little later in the story, like in the film, Robin Hood, Prince of Thieves. Whatever its other merits, the film establishes Guy of Gisbourn as a nasty piece of work, but when you get a good look at the Sheriff of Nottingham, Gisborn’s character pales.

Do you write your antagonists from the beginning, or later in the story? Have you experimented with surprising your readers with an apparent good or neutral character who turns out bad? Let’s chat in the comments.