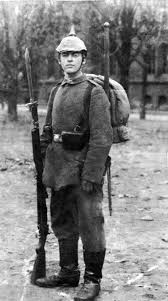 I went off to war at the tender age of sixteen. My mother cried and begged me to stay, but my country needed me. Due to my age, I was assigned to field headquarters as a dispatch courier for the first two years of the war. However, by the beginning of the third year, I had grown a foot taller and was shaving. And because men were dying at an alarming rate, I was sent into the trenches.

They say that war is hell. I say hell is peaceful compared to living in a muddy trench with bombs exploding around you at all hours of the day and night, although there were periods of respite from the shelling. Those were the hours when the enemy had to let their big guns cool or else the heat of firing would warp them. I lived like that for two years.

I was at Verdun where I saw the true hell of war. After eleven months, we fought to a standstill. When the dead were counted, almost a million men from both sides had given their lives and not one inch of ground had been gained.

By November of 1918, we were out of food, out of ammunition, and almost out of men to send to the slaughter. The people at home had had enough of seeing their sons and fathers and brothers shipped home in boxes. There were marches and protests against the war. Near the end, the dead were not even sent home. They were buried in the fields where they had fallen.

At last, the war was over. I am told that nine million men died in those four years, and another twenty million were wounded. I was there and those numbers seem a little low to me, but what do I know? I was only a private.

5 thoughts on “Again – by Andrew Joyce…”