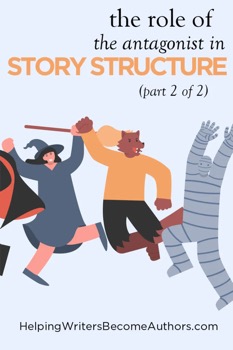 One way to think about plot is as a “push-pull between protagonist and antagonist.” Although the protagonist is the character who frames and, indeed, decides the story’s structure, the role of the antagonist in story structure is equally important.

Last week, I shared an overview of the antagonist’s role in the first five major structural beats within a story. I originally intended it to be one post, but it turned out to be nearly twice as long as usual, so I split it in two. Today, we’ll be rounding out the subject by examining the role of the antagonist in the second half of a story’s structure—the Second Pinch Point through the Resolution.