It may have begun with the healing ceremony. I’d been assured of the bitter potion’s virtues. Then, Nico was there with me, his bare skin radiant in the moonlight. His muscles rippled as he took me by the hand and led me up the precipice beyond the falling water.

A rainbow of colors emanating from him enveloped me, and I thrilled at sharing his aura. I gently caressed his face, running my fingers across his lips to feel their softness.

Pulling my fingers through his hair, I reveled in the certainty his energy commingled with mine—I was with him in forever time.

Gazing into his eyes, I plummeted into the dark green pool of memories and familiar feelings from long ago.

Nico was softly chanting and I heard my name. I tumbled deeper and deeper, spiraling down a funnel of undulating rivers, amidst fragrant pine trees, and the sweet scent of oranges.

Time no longer existed, there was no self and no other, we were one.

Nico reached over and placed a garland of herbs around my neck, then wrapped them around my wrists, like bracelets.

Stroking my hair, he held the feather wand above my head still chanting my name.

The ceremony had ended, and I descended further into the elliptical galaxy of his eyes—into his soul.

Have you ever met someone you instantly connect with—someone who seems to know who you are, and what you need? It happened to me at a vulnerable time in my life when I was mourning my youth and beauty and bored with my conventional circumscribed existence.

He was a charismatic kundalini yoga master and initiated shaman. Charming and magnetic, he appeared to be perfect—the answer to my prayers.

Truth is, he targeted me.

His keen ability quickly identified my vanity and fears. He made me feel beautiful and important to him, and gave me confidence, opening me up to the possibilities surrounding me.

Being married, I fortunately didn’t have a romantic relationship with him. Yet, he still had power over me. He made me feel a part of him—of something larger, and somehow more alive.

I wasn’t the only one bound to him.

As a successful healer with his own celebrity, he possessed an entourage of beautiful, successful Hollywood women.

He spent time cultivating each us, playing guitar and singing Spanish love songs.

He ensured each of us we were the most important person to him. He was captivating and passionate, yet nothing satisfied him. He was needy and controlling, making you feel desired and important to him.

Before I knew it, I was caught in the spider’s web, struggling for survival, craving the drug that was his flattery. The dark brooding torment he revealed in song compelled me—reaching into my gut and grabbing hold with an invisible hand. Then slowly and methodically he tore me down.

If I was at work and didn’t pick up his call he would threaten to end our friendship.

There was no explanation acceptable for not responding to his immediate demands. He played a cat and mouse game of pushing me away and then reeling me back in.

I no longer recognized myself. I had become a shadow of my former self and my self-worth had been shattered.

So, you see— Vampires are Real. Not the paranormal kind in stories, but rather emotional vampires—the ones who use manipulation and compulsion to seduce.

I wish I had known about narcissistic personality disorder.

Persons with this disorder treat others as an appendage and source of supply—though they will never feel gratified.

Just like in a vampire story, a narcissist drains another’s life force in the attempt to fill the echoing emptiness within.

The extreme drama Nico created was a plea for validation stemming from his fear of loss. The rages and melt downs provided a release of anxiety, and a euphoric high empowering him in the face of feeling worthless.

I felt compelled to fix him, even though I knew I couldn’t. I couldn’t bear the thought of abandoning him. He had awakened me, stirring the sediment that had long ago settled at the bottom of my well.

How much longer and at what cost could I continue to open my veins to quell the storm that tormented him?

Like many of the other women who had become ensnared in his cannibalizing web, I was faced with the choice of bleeding to death or reclaiming my life.

I learned from a friend in recovery about chasing the high, trying to regain the elation once felt in the initial phase of a relationship, be it with a drug or a person.

Getting it back had become my obsession. The craving, desperation and painful longing—that was the addiction talking.

Once I disentangled myself from him, I reflected on what had called the relationship to me.

It had been my fear of aging—of becoming invisible—no longer having heads turn when I walked into a room, no longer feeling desired.

Weathering this personal storm was a valuable experience that made me stronger and wiser.

It is only through such an eroding experience that I believe one can transform. Whether by free will or fate, my encounter with a narcissistic sociopath provoked a storm that shattered my perception of identity, duty, morality, and self-worth.

The storm didn’t blow in from the outside. I was the storm. Its turbulence forced me to confront the darkness, uncovering my secrets and my pain.

Luna Saint Claire is a costume designer and author residing in Los Angeles with her husband, a philosophy professor.

Her personal style can best be described as eclectic bohemian.

Though she now enjoys running and yoga, she spent years of her youth in the ballet studio.

Her part Native American heritage informs her work as a designer and influences her storytelling. 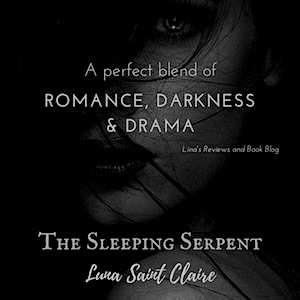 Thrilling as The Girl on the Train, twisted as Gone Girl, and tortured as Wuthering Heights.

Luna Saint Claire has a loving husband and an enviable career as a Hollywood costume designer.

Still, something is gnawing at her.

Bored with her conventional and circumscribed existence, she feels herself becoming invisible.

When she meets Nico Romero, a charismatic yoga guru, his attentions awaken her passions and desires.

Dangerous, but not in a way that scares her, he makes her feel as if anything is possible.

Infatuated, she becomes entangled in Nico’s life as he uses his mesmerizing sexuality to manipulate everyone around him in his pursuit of women, wealth, and celebrity.

Immensely sensual and psychologically captivating, The Sleeping Serpent is the compelling story of a woman’s obsession with a spellbinding guru and the struggle to reclaim her life.

At its heart, it is a painfully beautiful exposition of unconditional love that makes us question what we truly want. 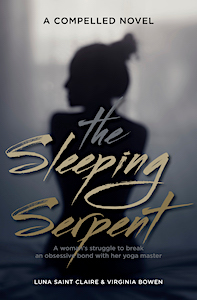