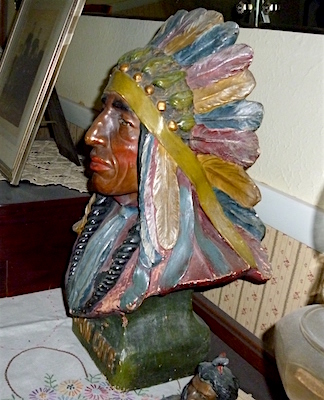 It sits on the floor and the cat is scared to death.  She’s never seen at eye-level a nearly life-sized plaster bust of a Native American Chief in full-feathered headdress.  She skirts the edge of the living room, never taking her saucer-sized eyes off this menacing object.  We all laugh hilariously.  LOL, for sure, if that abbreviation had even been known back in the mid-1960s.

I’ve been hauling that thing around ever since then, through many moves.  Right now it’s sitting on the sideboard in my dining room, surrounded by antique photos, as you can see in the accompanying pictures.  That’s my grandmother at the left of the left-hand picture, with two of her friends, taken in the 1890’s when she was a “teenager” (another term never used in those early days) and the belle of the small town.  And that’s my grandmother in the middle picture, taken about 1913, with my mother on the right and her brother on the left.  I called my grandmother “Mimi.”  And we always called the bust “Mimi’s Indian head.”

In the early years of the 20th century there was a craze for all things having to do with the Wild West, and that included everything to do with Indians (I can’t be politically correct in this article, because it would simply be risible to say “my grandmother’s Native American head.”)  This bust was one of a pair that sat on the mantle back in my mother’s childhood home in Missouri.  You can see our Chief has a name: Skin Cote.  The other was of an Indian of lower rank, with braids, a headband, and a single feather, and he was named “Lone Wolf.”  I never saw Lone Wolf.  When my grandparents moved to Colorado in 1922, they stored a lot of things in Missouri, and somebody broke into the warehouse and stole many of their possessions, including Lone Wolf.  My grandmother never got over that violation; she mourned her losses till the end of her life. 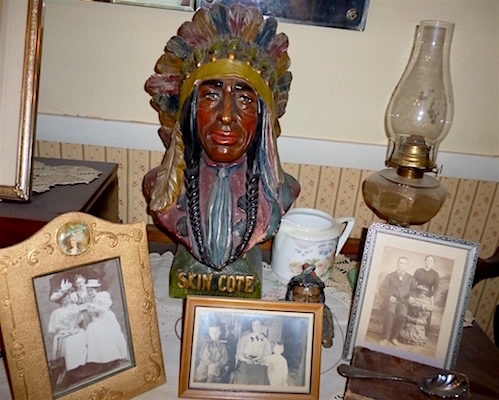 In the picture above, the photograph at the right shows my great-great grandparents – the parents of Mimi’s mother.  Their name was Killey and he was from the Isle of Man, which in itself has always fascinated me.  That’s one of her sugar shells and his Bible (printed in about 1-point type) sitting in front of the picture.  They say he made his own shoes and she scrubbed her wooden floors on her hands and knees with sand.  They homesteaded in Iowa and the family story says that parties of Plains Indians (probably a lot like Skin Cote and Lone Wolf) used to come and steal all the food in the house, while the family stood by meekly, not daring to protest.  That is, the raiders took everything except the butter – that, they would place up on the top shelf of the cupboard and let it be!  But the scariest thing was that they would take little Sarah (my grandmother’s mother) on their horses and ride off with her.  Her mother never knew whether she would ever see her child again.  But they called her their little Bluebird and they always brought her back safe.

One other humorous anecdote regarding the bust comes to mind.  In the mid-60s (in fact, after that very move I spoke of at the outset), my mother and I lived in Austin, Texas, where I was doing graduate work and working in the UT rare book library.  We had dragged all our possessions with us, including my grandmother’s Indian head.  Our landlord — a rather pixilated man, I must say – saw it and scratched his head.  “What’s that?  Some kind of hand lotion?” he said.  My mother had no idea what he was talking about.  Afterward, I said to her he must have thought it was an advertising piece, promoting some kind of skin care product called “Skin Cote”!

Skin Cote sat on the floor in Mimi’s house when I was a little girl and I used to squat down and examine him in fascination.  I was told by a dealer to whom I sold a good bit of stuff after my mother died that he was worth about $100.00.  Imagine how much more he would be worth if I had the pair!  But I don’t think I’ll sell him – he can sit there in my dining room until I die, and then somebody else can give him a new home – because he always makes me think of my childhood, of my heritage, and of my much loved grandmother “Mimi.” 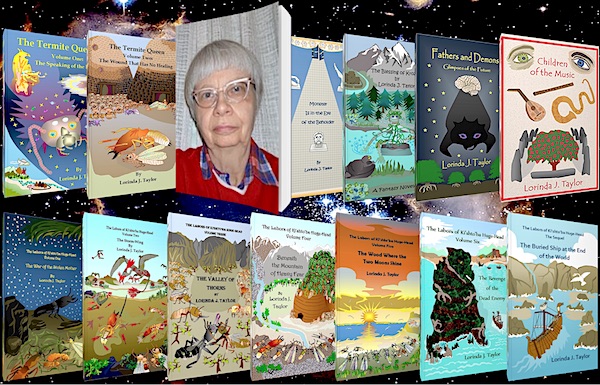