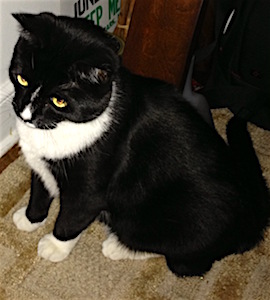 Hello from the Land of Zen! I, Zoe, the Fabulous Feline, am here today to enlighten you about something that is actually a pet peeve of mine. Yes, I know—and you know—that I am normally so <ahem> even-tempered, but I go catallistic about this particular topic.

And here it is . . . my one major pet peeve: The misuse of my favorite word, “bombastic.” Talking heads on television get it wrong. Elitists who write for pretentious periodicals get it wrong. Everybody gets it wrong. They think that because it starts with “bomb,” it must mean loud, boisterous, or clamorous. Not so, says this Fabulous Feline.

Bombastic means speech or writing that is inflated . . . high-sounding, but with little meaning. In other words, pompous, pretentious—and phony, if I were to use my own word in conjunction with Mr. Webster’s.

Here’s an interesting factoid relevant to the origin of the word bombastic: Philippus Aureolus Theophrastus Bombastus von Hohenheimn was a 15th century physician and alchemist who, at some point in his life, took the name Paracelsus. Do you think he took that name because it was shorter or easier to say? No! He took that name because he thought so highly of himself he believed he was beyond (“para”) Celsus (a renowned physician from the first century). This is just one, and maybe the most notable, example of the high regard in which Philippus “Paracelsus” held himself.

Because he was beyond arrogant and pretentious, people had to come up with a new word to describe him. And they used his middle name, Bombastus, to do just that. Hence, to be arrogant or pretentious in either speech or writing is to be bombastic.

Fast forward to a contemporary example of writing that could easily be deemed bombastic. Below is a direct quote posted recently to this very site by a well-known writer who, loveable though he is, shall remain nameless:

“Thank you for noticing my greatness and my charm. And I like the way you refer to me as ‘your noble self’. I kinda like that. As to your idea about videotaping my funeral. Well, I’ve left instructions that when I go, it’s to be kept a secret. I’m afraid that my fans will do more than just gnash their teeth. There would be rending of garments, covering in ashes, the world’s economy would crash. Presidents and kings would be brought low with grief. You get the idea. So it’s best that when I shuffle off this mortal coil, I do it quietly.”

Addendum: Danny the Dog takes exception that I used his comment as an example of bombastic writing. Duly noted, Danny.