It is clear from any Dickens’ novel that the great man enjoyed names. His friend and biographer, John Forster, said that Dickens made “characters real existences, not by describing them but by letting them describe themselves.”  You can find a comprehensive list of all Dickens’ characters HERE a website devoted to anything that could be described as Dickensian. 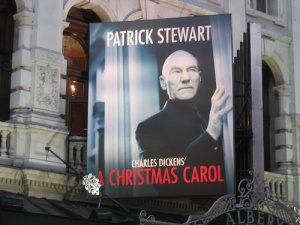 But it was at another useful blog, Bookshelf run by Anthony Atkins, that I discovered the origins of Scrooge. Dickens, never without a notebook, collected real names for his novels and short stories. In June 1841 he was walking around Edinburgh when he saw a gravestone in Canongate Kirkyard to Ebenezer Scroggie. Dickens misread the epithet beneath and thought it said mean man. He wrote in his diary: ‘it must have shrivelled Scroggie’s soul to be remembered through eternity only for being mean. It seemed the greatest testament to a life wasted.’ And…

5 thoughts on “Did you know where Dickens got the character Scrooge from? It was a bit of mistake actually…”