A Tale of Iscah

As I write this today, I’m hours away from finishing my serial Horse Feathers, which is the story of a boy who dreams of owning a pegasus and (for now) free for you to read on Fictionpress.  Horse Feathers was supposed to be a novella, but it’s topped 80,000 words making it longer than Seventh Night, the novel it’s supplementing.

Seventh Night is a tongue-in-cheek romantic fantasy adventure.  It was published in November of 2013 and follows the adventures of a pragmatic princess, a charming prince, a clever magician’s apprentice, and a talented sorceress as they try to thwart the plot of an evil king.  But the plot probably isn’t what you’re expecting.  While it twists through a number of fairytale motifs, it’s not a simple retelling but does indeed twist and twist again.

Seventh Night was also a project nearly twenty years in the making.  While working through the final draft and editing stages of the story, I decided to go ahead and start work on a set of four “short” stories that would follow the younger years of the main characters.  Originally, I had intended for these stories to come out as a single volume anthology called Before the Fairytale, but with the Indie route I was taking for publication, it seemed more practical to release them as free weekly serials.

The first tale in this set of four is called The Girl With No Name and is written in folklore style.  I was very pleased with it, so I put it through some additional editing and released it as an ebook.

Since Before the Fairytale was intended to be an anthology set, I allowed the story style and pace to vary quite a bit from Seventh Night and from each other.  Normally, that’s a terrible thing for an author to do inside a series…but they aren’t supposed to be a series, so much as supplemental standalone stories with interweaving elements.  They just weren’t supposed to get so long…

The styles chosen for each are meant to reflect something about the characters featured in them.  For an author, it’s fun to write variety, and I think fans of the characters will enjoy learning more about them.  But I worry that fans of the style will be annoyed when the next book isn’t quite the same.

Of the three stories currently out, they could be read in any order, but my suggestion is to start with Seventh Night and then step back in time for more details about the world and your favorite characters from the novel.  It’s much funnier that way.

When I’m not writing, I draw, and aside from that, I’m not very useful or exciting.  So I leave you with some links and pictures. 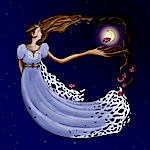 How to stalk Iscah online: