Jemima, Welcome to my Tree House, please take a branch and help yourself to some fruit & nuts 😀

So, Jemima, what does it take to be a successful author-publisher?

It’s my dream question, really. The dream being ‘successful’. Then again, it depends how you measure success, since by at least one of my criteria I have achieved success – some strangers have and are reading my books – and enjoying them!

So what has it taken to get this far with my dream? First, it took two wonderful animals to inspire me with their personalities into making up a story about them. Some people are inspired by their kids, others by colleagues, still others by dreams – me, it’s my pets. 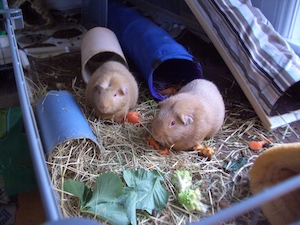 George and Fred walked into my life one July day, about a year after I’d moved from a busy job in the city to a quiet life in the country. I hadn’t had animals since I was a kid, and I was nervous – would I be a suitable person to look after these wee things? I chose guinea pigs because they looked cute, they seemed interesting, and they were big enough to see properly (unlike hamsters), but not so long-lived that I’d be committed to looking after them for years if things didn’t work out. Of course, now I wish they were much longer lived, and I’ve written my stories so that they are. Frankly, I fell in love with them. So much so that I had to get another pair, Victor and Hugo, to ‘spread the lurv’ about a bit! So that is why my heroes, the Princelings of the East, are Fred and George, the comic relief is Victor, and the antagonist, the baddie – although he isn’t really, he just has a different point of view – is Hugo.

The good thing about being inspired by these characters is that I don’t have difficulty in making distinctions between them on paper. People say my characterisation is good, but I suspect it’s just because it’s based on real character traits. I can (and have) argued this business of animals having characters, and sometimes you find the opponent is just against animals having ‘human’ character traits. I never said they did. They just respond to things differently from each other. I can describe as having different personalities.

Frankly, though, the current fashion frowns on writing about animals, certainly animals having their own adventures. So my books are not fashionable. No agent or big publisher will touch them.

I’m not going to sell a million of them.

Is that your definition of success?

Well, how about a saga of some space miners who have made themselves stinking rich by their success in mining asteroids. So successful that the Imperium is out to get them? I promise you there are no guinea pigs in these stories. There might be some sentient trees. There are definitely some surfing dudes and some near-catastrophes with inter-planetary objects.

It’s scifi, there’s some fast space-racing and some hot romance. OK, not that hot. Suggestive, maybe. It’s what I’m writing at the moment. Not really suitable for under twelves. I’ll tell you whether it’s suitable for under fourteens later.

What does it take to publish them?

Writing, editing, editing, editing to get the best story I can put together. A few helpful readers to tell me what works and what doesn’t. An awesome grammar guru to do all the rest of the editing and corrections, and a super-talented designer to do a great cover.

After that I will knuckle down to make it beautifully formatted for kindle, Nook, iPad and other e-readers, do a cover reveal, tell all my followers about it, sort out some marketing plans, pull in some reviews, send it out for critique and awards, maybe make a paperback version too. I’ll blog, tweet and pin about it. I’ll be marketeer, PR person, webdesigner, accountant and tax filer. Hopefully.

What have I missed?

Probably the key thing about being an author-publisher in today’s world: the online community. Making friends with people like the Story Reading Ape. Doing things like joint promotions, sharing what we like to read with our own readers. Writing guest posts on each other’s blogs….

Thanks for having me, Chris!

The writing career of Jemima Pett can be traced back to when she was 8 years old.  The evidence is a small booklet found in her mother’s box of treasures, written in a very childish hand, entitled The Little Stream.  Jemima has created articles and event reports for newsletters and magazines ever since, but early fiction attempts failed for want of suitable inspiration: characters and plot eluded her.  She had a career in business and in environmental research which kept her chained to a desk for many years. Determined to keep writing, she ended up doing manuals, reports, science papers, blogs, journals, anything and everything that kept the words flowing.  Finally the characters jumped into her head with stories that needed to be told….

She now lives in a village in Norfolk with her guinea pigs, the first of whom, Fred, George, Victor and Hugo, provided the inspiration for her stories.

Book 1: The Princelings of the East is an adventure set in a world of labyrinthine castles, bustling inns, and the curious Isle of Hattan. Fred and George leave the security of their isolated castle to solve the problem of the Great Energy Drain, meeting the dubious businessman Hugo, the young barkeeper Victor, the impressive Prince of Buckmore, and other movers and shakers.  Time is of the essence in this tale, and competition between castles drives the action.

Book 2: The opening of The Princelings and the Pirates finds Fred and George ensconced in Castle Buckmore. When the Prince announces his unhappiness with the wine, they set off to discover what has gone wrong at the winery. Captured by pirates, shipwrecked, and in danger for their very lives, the heroes are drawn into the Battle of Dimerie, where Fred meets his true love and George gets more than he bargained for.

Book 3: In The Princelings and the Lost City, Fred has made a commitment to his true love, Kira, but must win her father’s approval.  George, meanwhile, is near to fulfilling his destiny, but gets sidetracked by the arrival of a new flying machine.  A simple journey to introduce Kira to their home castle turns into a case of kidnap, mistaken identity, heartache, and the discovery of a totalitarian society hidden in the forest.

Book 4: In The Traveler in Black and White, Lord Mariusz of Hattan narrates, in his own Chandler-esque style, how he came to explore the world on the end of the time tunnel, and why he adopted the pseudonym Hugo in the first place. We meet old friends as their much younger selves and discover that stories of ghouls, ghosts, vampires and werewolves are not just tales to frighten children after all.

Book 5: In the fifth book in the Princelings series, The Talent Seekers, we find the young outcast from the Lost City travelling west as his mother suggested.  He is rounded up amongst other exiles, but escapes, and finds himself among people that could be his friends, something he has never had before.  But they are under threat, and Humphrey’s adventures twist and turn as he is called to his destiny by an unknown force, one that calls to his special hearing skills.  He meets other talented individuals and learns to be a team, to work with others for the common good. This book is probably more suitable for 13 and over as it contains pitched battles.

Coming this spring, Book 6: Bravo Victor. Our young bartender has grown up and is trying to make his way as a business guru. He encounters a shady traveller and seeks advice from King Fred, who sends him on a mission to aid the mysterious Sundance and his beautiful accomplice, and to find Fred’s brother, George, overdue after a visit to a flying festival in the Rhinelands. Victor tells how he uncovers a tangled web of lies and deceit, and an old friend from the past, or is it his future?

13 thoughts on “Guest Author Jemima Pett and The Princelings Series”