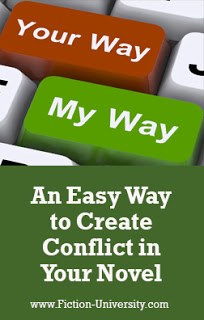 Conflict is vital to a novel, but that doesn’t mean it has to be a fight.

A common misconception with conflict is that is has to be antagonistic. Characters should fight, argue, and plot against each other in the worst ways, but this is just one of the many ways in which you can create trouble in your novel.

It’s also one of the least interesting, because with most antagonistic fights, there’s one right side and one wrong side. Usually, the protagonist is on the right side, so all we’re really doing is writing an argument readers already agree with—which might work for reality TV, but it’s not as much fun in a novel.