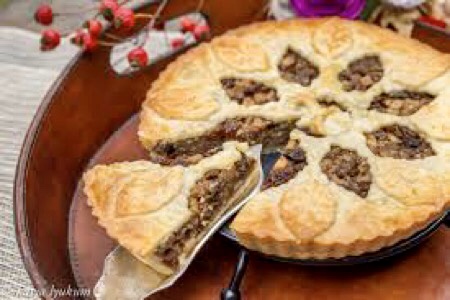 Mincemeat pie is fairly uncommon in the United States these days. There was a time when many holiday tables would have been incomplete without the traditional favorite that crossed the ocean with our English forebearers, who buy 73 million mince pies each December. But mince pie, which rarely contains meat in its modern form, has a dramatic history.

Five hundred years ago in England, making mincemeat began as a method of preserving food without salt or smoke. Finely ground boiled mutton, pork, rabbit, or other game was combined with sugar, dried fruits and spices and baked into large, sturdy pies to be shared or stored for a month or two. The mincemeat itself could be kept for even longer in cool, dry places. By the fourteenth century, a recipe for mincemeat pie called “The Tarts of Flesh” had made its way into one of the oldest known English cookbooks, “The Forme of Cury.” The ominously named recipe called for boiled pork, stewed rabbit and bird, eggs, cheese, sugar, saffron, salt, and other spices to be tossed together in casings of flour and water, then decorated on top with patterns of dough. “The Tarts of Flesh” was reserved for wealthy diners on special occasions.

As the Crusaders started straggling back to England from the Middle East in the eleventh century, they carried spices and ideas with them, and the “Christmas pie” evolved. Nutmeg, cinnamon, and cloves were added to the mincemeat to commemorate the three gifts given to the Christ Child by the Magi. The sweetness of the dried fruits stood for the joy of the nativity; grated orange peel symbolized the bitterness of the crucifixion. Tradition held that mince pie had to be made with thirteen ingredients to represent Jesus and his Apostles. In honor of the Savior’s birth, Christmas pies were baked in oblong casings to commemorate the cradle or the coffin of Christ. A dough figure of the Christ Child was placed beneath the top crust of each pie, and the outside was decorated with pastry stars. Children would remove the baby and feast on the “manger pie” in celebration. The pies had grown smaller by then, and it was considered lucky to eat one pie on each of the Twelve Days of Christmas, ending with Epiphany on January 6th.

In 1536, King Henry VIII began seizing Catholic monasteries. In a desperate and futile attempt to save Glastonbury Abbey, abbot Richard Whiting tried to curb the king’s greed by secretly sending him a “mincemeat pie” containing deeds to several of the abbey’s costliest estates. A few of the deeds were stolen by Whiting’s servant, Thomas Horner, who has been immortalized for his thievery to this day in a familiar children’s nursery rhyme:

Little Jack Horner
sat in a corner
eating his Christmas pie.
He stuck in his thumb
and pulled out a plum
and said, “What a good boy am I!”

In time, the oblong pies–shaped like cradles or coffins and large enough for smuggling land deeds–morphed into dainty round tarts. The meat content decreased slowly till it all but disappeared, and brandy was added, leading to the modern mincemeat pie.

In 1657, the Puritans seized power in England and outlawed mince pie, along with Christmas and everything else remotely fun and festive. Soldiers patrolled the streets and confiscated, by force if necessary, any food being prepared for Christmas celebrations. Fortunately, their oppressive rules were struck down a few years later with the restoration of the English monarchy. However, the Puritan influence was strong in the American colonies. Mincemeat pies were banned at Christmastime as frivolous at best and idolatrous at worst in many New England towns, and Christmas itself was actually outlawed in Boston between 1659 and 1681. Thus was born the saying, “It’s always winter in Boston and never Christmas.”

Despite its rough start, mince pie eventually thrived in America. President William Howard Taft received a 92-pound Christmas pie as a gift in 1909, delivered to the White House in an oak case. The meatless mincemeat churned out by factories during both world wars secured its place as an American staple for much of the twentieth century. Detractors said too much mince pie was unfit for children and even suggested mincemeat caused nightmares and homicidal tendencies. In 1908, when a Yankee physician claimed mincemeat pie was bad for America’s health, the New Orleans Daily States shot back, “The republican dynasty at Washington may overthrow the federal constitution, the rights of the states and pluck the stars from the blue field of the national ensign, but the mince pie will continue to be the nation’s comfort and pride.”

Combine all ingredients except half of the rum or brandy in a medium-sized pot. Simmer over medium heat for thirty minutes, stirring occasionally, till almost all liquid is absorbed.

Some people swear by making mincemeat three to six months, or even a year ahead, and packing it in airtight containers to let it age. Press the mincemeat down firmly to eliminate air pockets, and refrigerate till ready to use. This recipe makes two 9-inch pies, or it can be put into a couple of pretty jars for holiday gifting.

To bake, fit a raw pastry crust into a 9-inch pie plate. Spoon half of mincemeat into unbaked crust. Add top crust, seal and flute edges. Poke top crust in a few places with a fork to vent steam while baking. If you like, decorate edges of pie with small dough stars made using a cookie cutter.

Bake pie for 45 minutes at 375 degrees. If dough stars or pie edges get too brown during baking, cover with foil. Enjoy!

To see my guest blog posts about parenting in the dark,