After the huge success of ‘Gubacsi Dulu’, the first book in my Humanity H2O sci-fi 3-book series, the second book, ‘Radnoti X’ is about to be released on the 5th of October, 2020. With Pre-Orders it already received Amazon’s new #1 New Release orange banner —like its predecessor —and who knows what’s going to happen once it is published.

For myself, there are many things which are special about this little sci-fi series. The first book brought many personal goals in my writing career: most reviews and ratings for one book, best Amazon rating, #1 in all three subcategories, 1000+ free download promotion, 100+ sales, 10k+ KENP, and many others. All three books are the accumulation of many influences in sci-fi literature, film and TV, they are also a chance to show many flaws in the human character we all know and live with, but most importantly, they gave me the chance to create a time capsule, to capture the names — though not their characters — of those students of mine who have shined in one way or another. The main character is my most treasured muse and if it wasn’t for her insane online work in the spring of 2020, I wouldn’t be here writing this.

Another reason why I am here writing this at this moment in time is because of many people, including Chris, but also Jasper T Scott, a USA Today Bestselling author of sci-fi series. He was so good to write a foreword for the second book…

I’ve known Dani J. Caile for seven years now, pretty much since my writing career began. He’s been there since the beginning, helping me edit and proofread my own books. He’s consistently made improvements to my own work over the years, for which I am deeply grateful. Throughout that time, Dani has been writing his own books, perfecting them, and putting himself out there time and again.

Dani Caile is probably one of the most underappreciated writers I know. He deserves to have a much bigger audience than he does, but with the popularity of this latest series I think perhaps he’ll finally get there.

I’ve read several of Dani’s books now, including this latest series, and I can say without reservation that his writing has only gotten better over the years. This latest book is a superb example of that—mystery, twists, and deep compelling characters with flaws that make them feel like people you’ve known for ages. Radnoti X and the entire Humanity H2O series is truly excellent sci-fi, but it’s even better writing. You’ll be hard-pressed to find a typo in Dani’s work, and even harder-pressed to predict what’s coming next. I couldn’t stop turning the pages, and I’m quite sure that you won’t be able to either.

If you’ve gotten this far, read on! Because you’re in for a treat.

What more can I say? Please come and take a look at Radnoti X: Book 2 (Humanity H2O) HERE

If you haven’t read the first book, Gubacsi Dulu, please come and take a look HERE

And if you fancy your chances with the third book, Farkas Alpha: Book 3 (Humanity H2O), please come and take a look HERE, maybe even pre-order like so many have already! 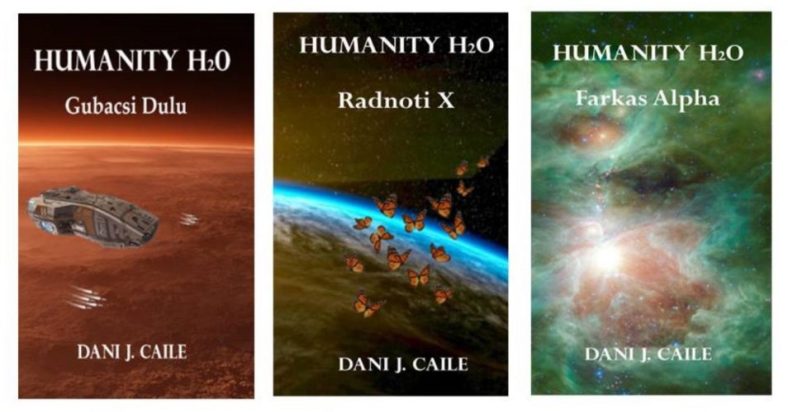