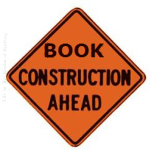 The basic premise of any story I want to write can be explained by answering eight questions. Each answer is simply one or two lines, guideposts for when I draft the outline.

A plot idea I’ve used before as an example is an idea I’ve had rolling around for a while. I hope to write it as a novella (about 12,000 words) in November. This little tale features a pair of thieves-for-hire, set in an alternate renaissance reality.

2 thoughts on “Plot and Theme #amwriting”