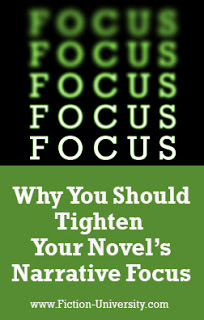 A loss of narrative focus can lead to a loss of reader interest.

I read a novel once that started off strong, then wandered into the weeds. It was a shame, because the premise was great and I really wanted to know what happened, but the story grew more confusing and muddied the farther I read.

It completely lost its narrative focus, and in doing so, lost its reader.

If you’re unfamiliar with the term, narrative focus is the common idea that ties a sentence, paragraph, scene, or chapter together. It’s what keeps the story flowing because everything lines up in lovely little story roads. It’s similar to narrative drive, as it helps keep the pace moving as events and details build upon one another and make readers feel like the story is going somewhere they can clearly follow.

Basically, if you’ve ever had a four-year-old tell you a story, you’ve experienced what a lack of narrative focus sounds like.

Let’s look at each of these more closely.