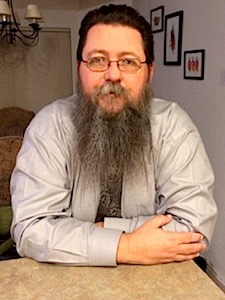 Thank you for having me back, Chris. It’s been a while and I’m happy to be here. I am showcasing my newest novel today, Grinders. 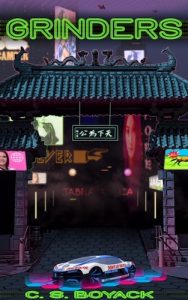 This is a cyberpunk story set in our near future. I went out of my way to make sure there were some good things and bad things about our future way of life. Unfortunately, there are already some similarities showing up. I know I feel like a cyber-shut-in during these troubling times.

I’ve been to enough Zoom meetings to last a lifetime, but in futuristic San Francisco some of that is prevalent. Imagine police officers giving courtroom testimony in a kind of virtual reality, or holographic doctors being projected from an ambulance.

The story has been getting some good reviews, but could use more attention. I’d like to share a few snippets from various sites:

No one has a wilder and more fertile imagination than C. S. Boyack. His latest release is so packed full of entertainment, it boggles the mind! And the world-building is beyond creative. Holy Moly! This vision of an all-too-possible future is engrossing, funny, frightening, and compelling, all at the same time. And oh, yeah—about the story. It works to perfection as well. Take some cool characters, an interesting antagonist, and a few fun critters being taught wild and crazy skills, stir well, and what do you get? Grinders! A book that’s an all-around treat to read.

Although this was my first foray into cyberpunk, I must say I thoroughly enjoyed the trip. I felt as though I were doing a “country bumpkin” walk through this futuristic cityscape, my mouth hanging open every step of the way. I highly recommend you take that walk, too. You’ll be glad you did.

In addition to phenomenal character development, Boyack created a futuristic (yet not unbelievable) world where people have made many costly mistakes and paid dearly for them. They also have made many useful advancements. This was a fun and fascinating world, exciting to visit and entirely enthralling. This was clever and creative and really stuck with me. It foreshadows social and environment issues without being preachy. I both laughed at the situations and feared the repercussions.

GRINDERS is classic Boyack—wildly imaginative and fast-paced. If you’re looking for a quick and engaging read, you can’t go wrong with this one. Highly recommended.

Grinders is set in the future in my favorite city, San Francisco. The waters have risen to change the landscape of the city, but people are still the same in the essential ways. Jimi is a cop who, after a mistake, was put on the grinders squad. They partnered her with the veteran, Lou, who used to patrol his beat on a horse. The grinders squad is the job no one wants, and Jimi is determined to move on by finding a wanted grinder. The relationship between Jimi and Lou felt real to me, but my favorite relationships were with the AIs, especially Cole, the cat. His comments had me laughing. I fell in love with the forest that generated energy and wanted to save it. There was a lot of detail that made this world easy to picture. I loved Jimi’s underwater apartment with an octopus living outside her window on her “porch.” I felt a lot of sympathy for the grinder’s family and situation.

Nootropic is the story’s antagonist, but I have to admit that I really felt for the guy. And the longer the story went, the more I worried that he’d get caught and imprisoned, that his wife–whom he’s put in a large test tube to keep her alive long enough for him to save her–would die, and his son would end up in foster care. I even got attached to the rat and muskrat Nootropic used in his lab.

It is a brilliantly plotted story that is at once strange and profoundly deep, almost on the level of prophecy… – a tale about the future of the Earth, human choices, paths not taken or taken too late. This is a novel about how far we’ll go to create the comfort we dream of, to save people we care about or ourselves.

Those are enough to make a guy blush. Grinders has been out for a while, but could use more reviews and readers. After that plea it’s time to bring this to an end. I’ll leave you with the standard Blurb and Bio. Many thanks to Chris for hosting me today.

Jimi Cabot made one mistake as a starving college student. When she went to work for the San Francisco Police Department, it nearly cost her the job. The union stepped in and they had to reinstate her. They did so by assigning her to the duty nobody wants, Grinder Squad.

Grinders are people who use back room surgeries to enhance their bodies with computer chips, and various kinds of hardware. Jimi is sure that if she can just bust one grind shop, it will be her ticket back.

Paired with a veteran cop, she soon learns that Grinder Squad is a cash-cow for the department. They are nothing more than glorified patrol cops, and generally get the worst assignments.

Matchless is the most wanted grinder of all time. He disappeared years ago, leaving only the evidence of those he enhanced during his career. With these pieces, Jimi picks up the cold trail to try working her way back to more respectable duty.

Grinders is a cyberpunk story set in a world where global warming has eroded coastlines, and society has solved many of our current problems by replacing them with new ones. There are cyber shut-ins, cyber-currency skimming schemes, and more in this futuristic tale.

This book also takes the opportunity to poke a stick at current issues that seem to have lasted into the future. Entitled people, helicopter moms, overzealous homeowner associations, and lack of decent jobs are all present. Never preachy, these issues make up the day to day work of a patrol officer.

I hope you enjoy Grinders as much as I enjoyed bringing it to you.