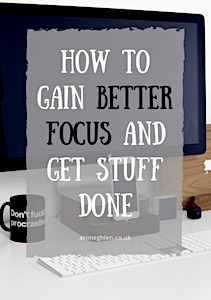 Recently I wrote a post about How my new schedule made me super productive, which became quite the popular post.

Now that article was specific about how I block my time for certain tasks which has allowed me to get larger amounts of work done and also increased my focus (believe me, I was a true scatterbrain normally).

Apparently, I was not alone when dealing with the issue of focus and I received feedback from people both on this blog and in emails from people telling me the difficulty they have in getting things done.

I decided today’s topic was going to discuss some advice I have for aiding focus and being more productive in general.