I have ended up here, because I managed to earn myself a bonus year of life.

Somewhere between October 13, 2016, and October 13, 2017, I convinced myself that I was 37, and not 36, years old. During a trivia game with some friends, I was asked my age. Having never been one to shy away from repeating the figure, I confidently replied that I was 37, to which my astutely mathematical friend responded that, since I was born in 1981, this was incorrect. In line with modern customs, I promptly asked my smartphone assistant to tell me my age. “You are 36 years old, Gregg,” the assistant responded in a slightly unsettling, motherly tone.

OK. So, I was never going to be a late-blooming mathematician, but, I did score a bonus year and that was pretty neat. It was August 2017, so I had up until October to figure out how to spend the additional 365 days that had been gifted to me. Although I jog and ride my bike regularly, I’m not an adrenaline junkie by any measure, so all the usual suspects such as bungee jumping or skydiving were out. I do love to hike, though, so maybe I could tick a few overseas hiking trails off the wish list; Iceland, the U.S.A, Japan? Although an enticing idea, hiking didn’t fit with the whole ‘bonus year’ theme, since it was an activity I might only commit to for a month or so. Also, working full time as a teacher of students with disabilities meant taking time off work, which I wasn’t willing to organise at that stage, either. Then came the camping trip.

My step-daughter, Ruby, usually sends herself to sleep with frightening ease following a story reading each night, so, while camping near our house in Tropical North Queensland one night, she asked me to read to her before going to bed. We’d neglected to pack any of her picture books and it was therefore left to me to tell her a story. The plotline my mind conjured up was about a young girl who, “Lived in the most beautiful castle in the world. Her name was Princess Ruby and her castle was so large that, one morning, she woke up and didn’t know where she was!” This story would later become The Tale of Princess Ruby and would be the first tale uploaded to my website. Following the impromptu development on the plotline to Princess Ruby that night (I’m not ashamed to admit that I introduced a talking mouse to try and speed the events along…), I thought it would be great to type the story out just to have on hand. Then the idea struck me: Many of the artists and creators I have been influenced by have spoken of the virtues of creating something every day, so, what if I could tell Ruby a story each night and then upload it for others to share?

Whether the idea was good or bad, it had stuck and I couldn’t shake it. I had made some mock websites in the past for a band I was in and for a photography business I pretended was going to be successful ‘at some point’, so, I paid for the rights to own www.greggsavage.net and went about setting up a blogging account. I typed out The Tale of Princess Ruby and posted it online. It was cool getting the two other stepchildren to punch my website into their tablets and read the story. Now, if I was going to do this for 365 days, I had to see if I could invent and type out another story the following night and The Tale of The Tall Man was born. Two stories down, I was pretty chuffed with myself. Time to break for a few days until I ACTUALLY start the project. Then, my amazing mathematical talents kicked in again and I thought, well, if I keep going now, at least I’ll be finished earlier than if I started the project later.

Thankfully, through sickness and health, I have written more since then and I am fortunate enough to be receiving views and messages from around the world every day. I have created a fictitious world where characters sometimes explore humorous and philosophical ideas and, at other times, experience potentially meaningful events, only to discover that their efforts have been all but futile. I have several recurring characters appearing throughout the tales, though I make sure each tale can stand on its own, and, with the help of an editor, I have just self-published the first ten tales I wrote in an eBook which will be part of a series called First Everything, Now This.

Your interactions will assist me in narrowing down the more engaging stories (I’m under no illusion that writing a story each day means some will be markedly better than others), so I encourage you to head over to the blog and interact with the tales to find some you and your family might enjoy. I will attempt to make your efforts, and the hours spent figuring out how to publish an eBook of worth, by releasing the best stories for each month in an eBook for the next twelve months. Provided I’ve got my maths right this time, of course.

Thank you for reading. 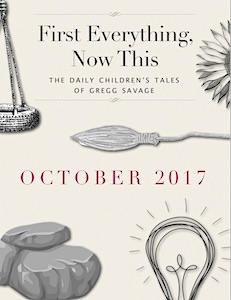