The beginning’s always a good place to start – and mine was way back in 1930. I was born in the East End of London in the United Kingdom.and lived through the horrors of the Blitz in World War 11; with society still recovering from the Great Depression. From an early age, I became a keen observer of the stoicism of my neighbours, which ignited a deep interest in people.

When old enough, I trained as a Nurse and Teacher, obtaining a Degree in Psychology, followed by a London Diploma in the Education of Handicapped Children. I was also involved in Sir Keith Joseph’s efforts to break the ‘Cycle of Deprivation’ in the UK. and was accepted by The British Psychological Society for the testing of released prisoners in an attempt to channel them into the most suitable work.

In the terrible fogs:‘pea-soupers’ – of the late 40’s and 50’s – by then married – I cycled from my home in Victoria: past The Houses of Parliament towards Aldgate and Blackwell Tunnel to help patients living near the docks in the East End with breathing problems, and was surprised to learn I was nicknamed “The Angel of Aldgate.” I later wrote about my experiences in a memoir, and nursed many, deprived people: some whose only sin was being poor. I learned not to judge for everyone has a story to tell. Being a nurse, I dealt with all sorts of characters, from Saturday night brawlers to gang victims who had been slashed with razors; tending also to women whose lot in life seemed to be either dodging the back handers from drunken husbands or dealing with a brood of hungry children. Conversely, I also met many courageous souls who were battling against the odds, and grew to admire the human spirit.

I went on to have three children, and after retirement, lived for several years in Spain, joining the U3A (University of the Third Age) and began writing, Although mostly concerned with the many serious problems in the world today, I use humour as a powerful buffer to keep me afloat! I now live by the sea in Torquay in the UK with my husband, Peter, and have written a book titled “The Angel of Aldgate.” My next one – featuring a’ river-boat adventure,’ – is coming along nicely! I thoroughly enjoyed the experience of joining my good friend Joy Lennick in writing Where Angels & Devils Tread. 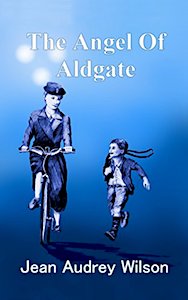 Except where otherwise noted, content on this site is licensed to Christopher Graham (aka, The Story Reading Ape), under a  Creative Commons Attribution-NonCommercial-NoDerivatives 4.0 International License.
Join 15,668 other followers