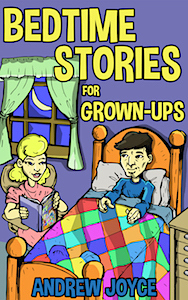 What you are about to read is a true story. It’s from my book, Bedtime Stories for Grown-Ups, a collection of short stories that are a mixture of fiction and non-fiction. My hitching adventures are true. The Danny narratives are also true, but written from a perspective different from mine. The fiction stories are a jumble of genres.

The book is not out yet, but when it’s up on Amazon, I’ll be sure to let you all know about it.

Here’s one of my hitching adventures. By the way, in the hitching tales, I use my real name, Billy Doyle—Andrew Joyce being my pen name.

John, Kris, and Me

It was 1968; I was eighteen-years-old, and I was hitchhiking from Miami to New York. I had gotten off the beaten track, so to speak. I should have stayed on US 301 (this was before the Interstate Highway System), but instead found myself just south of Memphis, hoping to catch a ride into Nashville by noon and then catch a long haul out of that city.

It was early morning. The traffic was light, and I wasn’t having much luck when, suddenly, a black Mustang screeched to a halt, and the guy driving leaned over and said through the open passenger-side window, “I’m headin’ to Nashville, that do you any good?”

As he’s accelerating, he’s looking straight ahead, not saying anything, which is kinda strange but not unusual when you’re hitching. So I said nothing and stared out the windshield at the fast approaching skyline of Memphis. Then it hit me. I know this guy; I should have tumbled from the voice.

At that time in my life, I was not into different types of music; I liked rock n’ roll. Since then my taste in music has matured to encompass all types. But even though this guy wasn’t a rocker, I knew him and his music. A couple of his songs had crossed over and were played on the top forty stations.

The driver was intent on what he was doing, but I think he caught me looking at him out of the corner of his eye. I noticed he had a firm grip on the steering wheel, his knuckles were white. After a few minutes, he turned to me, saying, “Howdy, my name’s John.” At the same time, he raised his right hand from the wheel and stuck it out in my direction.

Once John and I shook hands, he became more talkative. Hell, he became downright verbose. He told me about his hitchhiking adventures and asked me about mine. We were three hours out of Nashville and I don’t think there was another quiet moment for the whole three hours. We talked about life, women, and we even got into a metaphysical discussion. He told me about his army days and the time he was arrested in Texas. Just to keep even, I told him stuff that had happened to me while on the road. We didn’t talk about his music or anything like that. I’d been around enough to know that coming off as a gushing fan would have been a major turn-off for him. And besides, at the time, I was not a fan, gushing or otherwise. But by the time we hit Nashville, I was becoming a fan … of the man if not his music.

As we neared Nashville, he told me he’d just gotten married a few months back and was dying to see his wife. “I’ve been gone two days and it feels like two years,” he informed me. Then he said, “It’s about dinner time; why not stop in and get something to eat and then hit the road. June’s a great cook.”

I accepted his kind offer, and we got off the highway and headed for his home, which was only a few blocks away. When we got to his house and as we were pulling into the driveway, he said, “Looks like June is out somewhere, but don’t worry, we’ll rustle somethin’ up.”

I told him not to bother, that I could cadge a meal down the line. He looked at me, shook his head, and in that deep voice, he asked me if I had any money. Of course, I didn’t and I told him so. He told me that he’d been on the road and hungry, and that if I didn’t get my butt in the house pronto, he’d drag me inside.

So in we went, and we walked right back to the kitchen. John told me to sit at the table as he opened the refrigerator and looked around for a moment before saying, “Ah ha! It’s still here.” And he pulled out a platter with a ham on it. I mean a real ham, bone and all! He also came up with a jar of mustard and a hunk of cheese. As he started to slice the ham, he told me where the bread and plates were kept and asked me to get them.

When the sandwiches were made—two of them—he asked me if I’d like a beer.

So there I am, sitting in the kitchen of a man I’d met only a few hours before, and I’ve got two thick ham and cheese sandwiches and a can of beer in front of me. Not a bad score and the day was still young!

I asked him if he was going to eat, and he said beer would do him fine.

We’re sittin’ at the kitchen table, shooting the shit, when the doorbell rings. John gets up, but before he leaves, he takes a long swig of beer. “Be right back,” he says. A few minutes later, he comes back into the kitchen with this guy.

“Billy, I want you to meet a friend of mine. This here is Kris.”

I had my mouth filled with ham sandwich, so I mumbled a hello. He waved and smiled, “Glad to meet ya, Billy.”

John asked Kris, “How about a sandwich and a beer?”

“Just a beer, please. It’s my lunch hour, and I’ve got to get back to work. But I have a new song I’d like you to hear and see what you think of it.”

By now, I’d eaten my two sandwiches, and I had nothing to add to the conversation, so I figured I’d just finish my beer and get the hell out of there. But before I could say my thanks and hit the road, John leaves the room and returns a moment later with a guitar.

Prior to my going any further, I’ve got to lay the scene out for you. We’re sitting at a round kitchen table. To my left is John and directly opposite me is this guy, Kris Kristofferson (before he was famous). John and I were hitting our beers and watching Kris tune the guitar. Then he picked at the strings and started to sing. I don’t remember what the song was. I wasn’t really paying attention. In my mind, I was rehearsing my good-bye speech to John.

I’ve got to hand it to Kris; he smiled broadly and said, “That’s okay. I just wanted you to hear it and get your thoughts.” Then he lifted his beer and said, “Prosit.” That was my cue to leave. I stood and told John I had to hit the road. He said he’d drive me back to the highway, but I told him not to bother, he had company, and besides, it was only a few blocks away. Kris said if I could wait a few minutes, he’d drop me off at the highway on his way back to work. I declined his offer. I didn’t want to wait around. I had a full stomach and New York City was calling to me. I said my good-byes and walked out the front door, retrieved my case from the Mustang and headed off for further adventures.

Just one last thing: When I got to New York and opened my case, there was Benjamin Franklin staring up at me from on top of my clothes. John must have put the C-note in there when he went to let Kris in.