Question: What’s the connection between my passion and social anxiety?

Answer: Both of them grew on me without my noticing. Both have remained with me. And one relates to the other.

As a child, I was outgoing and always wanted company. But company didn’t want me, especially if it was made of other children. I learned to hide my emotions from them and gradually refrain from talking to them as much as possible. That’s what led to social anxiety. I didn’t know it was coming and certainly didn’t want it. No one does. No one chooses to have social anxiety. It comes upon you when you’re not looking and takes over.

Decades later, I discovered the name, social anxiety, and with it, a world full of people with similar problems and feelings – people struggling in similar ways to me. And I realised how common yet little known social anxiety is, and how helpful it would be – to us and to the whole world – if the condition were known and understood.

All are welcome to attend the online launch party, which will include songs, stories, jokes, competitions and more.

Miriam Drori is the author of a romance, Neither Here Nor There, and co-author of The Women Friends: Selina, the first in a series of novellas based on a painting by Gustav Klimt. She is married with three adult children and enjoys folk dancing, hiking, touring and reading.

Miriam sees the publication of Social Anxiety Revealed as an important step in fulfilling an ambition that began in about 2003: to raise awareness of a condition that’s very common yet little known.

Miriam has struggled with social anxiety for the past fifty years, although for thirty-five of those years, she didn’t even know the name of it or that a name existed. Only recently has she come to the conclusion that she shouldn’t have been struggling at all, but rather making friends with it.

In order to introduce this book and as a place for discussions with readers,

Miriam Drori can be found all over the Internet, including:

‘Social Anxiety Revealed’ will be

available at Amazon from August 22

in paperback and ebook formats 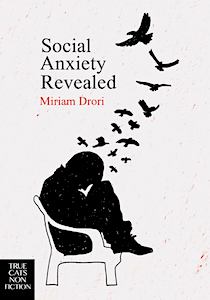