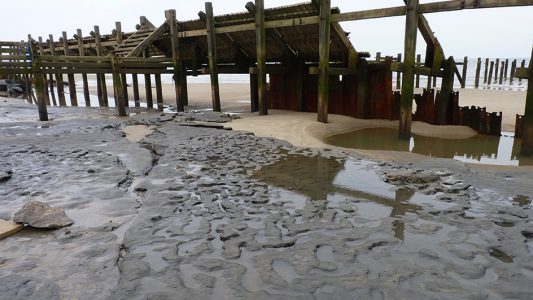 Erosion of our shores is nothing new. Though the rate of erosion may be increasing due to climate change, England’s coastline has always been on the move.

Global sea levels have risen by some 110-130m since the melting of the vast ice sheets that covered the world’s continents 22,000 years ago (the high point of the last Ice Age). Until some 8500 years ago Britain wasn’t even an island, and people could walk between East Anglia and the Netherlands across so-called ‘Doggerland’ (now inundated by the North Sea).

Erosion is justifiably seen as a threat to people’s homes and livelihoods as well as to the nation’s historic fabric. But coastal erosion is also capable of uncovering buried archaeological gems before destroying them.

In celebration of the annual Festival of Archaeology (15 – 30 July), Marcus Jecock, Senior Investigator and Coastal Survey Lead at Historic England, takes us through…

2 thoughts on “Slipping Away: Coastal Erosion and Archaeology”