As someone who has always been socially inept, the prospect of standing in front of people and talking didn’t really occur to me until very recently and I now I often find myself screaming inside and running on nothing more than adrenalin.

I never intended to write poetry.  This all started with pop-star ambitions until I realised that I couldn’t sing or play an instrument.  The song words that I had written for my World conquering band became poetry instead – that was thirty years ago.

It has taken me all this time to wait for the right moment.  Some of the poems in HTBW are quite old, others more recent but they all display something that has stirred in me at some point along the way.  Much of what I have included in my first book may be thought of as provocative or bad taste, and to an extent if I have instilled that feeling in a reader then the job is done. 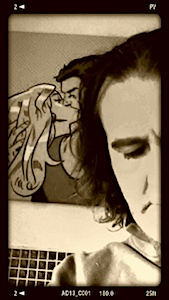 Being socially inept meant that poetry became my outlet rather than speaking. It was easier to put pen to paper than talk to someone, it became a natural progression to elaborate on some of the thoughts, however minuscule, into something completely fictional.  Or are they?

Not all my poetry is from the dark side.  I have been lucky enough to obtain an initial two book publishing deal and decided to start with the dark stuff and progress to happier times on book 2.  Suffering from depression since my teens, writing has often proved a tonic.

You’ll may be aware that one in four people in the UK suffer from depression at some point in their lives.  That means a quarter of us here tonight.  It isn’t a case of ‘cheering up’ or of having ‘nothing to worry about’, it’s far deeper an issue than that.  More importantly, I believe that it never really ever goes away.  The seed is always there.  There is always the chance ‘the black dog’ may creep up and grab you again.  Always the possibility that you will begin to hit the black wall.

I’d like to think that in a perverse sort of way, my book offers hope.  A way of channelling fears and worries into something that will allow them to leave your system for at least a short while.

There are varying degrees of subject matter in the poetry that I write.  It is always honest and truthful and possesses a strange sort of beauty in its portrayal of everyday life.

I hope you like it for what it is.  I hope you can take something from it and put it to good use.   I hope that you enjoy reading my words