Hi, everyone. Many thanks to Chris for his kind invitation to visit and write on his blog. It is much appreciated and a great honor. For those of you who do not know me, my name is Colleen Chesebro. I am a writer, a poet, and a fairy whisperer…

Yes, I bet a few of you are scratching your head wondering what I am talking about – a fairy whisperer? Let me tell you the story of the greatest experience I have ever had.

While on a walk during a warm, foggy morning in November 2014, I had a close encounter of the fairy kind. At the time, we were living in Pensacola, Florida. I still remember the day, as if it has been carved into my memory; something I will never forget.

The road I took on my morning walk

As I walked along the road, I heard a sound that instantly caught my attention. At first, I considered the possibility that the sound might be an injured bird rustling in the thick underbrush. I peered into the foliage and drew back in surprise. At first glance, I thought I saw a ruby-throated hummingbird with brilliant green feathers. However, that was not so.

Instead, appearing in front of my eyes was a tiny green swamp fairy fluttering on delicate wings that looked like transparent leaves. She had hair the color and consistency of corn silk. Bottle green leaves adorned her small body. The heady fragrance of lavender, patchouli, and sandalwood wafted on the air.

I stood there at the edge of the road transfixed by the vision. I realized then, I had witnessed a miracle. I had been given the gift of fairy vision.

The spot where I saw the swamp fairy

The petite winged-being stared at me with eyes as green as the leaves she was hiding in. I must tell you, this meeting felt something akin to a spiritual encounter. An overwhelming feeling of peace and love surrounded me and held me within its grasp. In an instant, she was gone. The swamp fairy vanished into the fog that swirled around me.

I shook my head and continued my walk. My feet felt lighter that day. I knew something had changed. The swamp fairy had ignited my imagination. I knew what this fairy encounter meant. I had been granted the ability to become a fairy whisperer.

Soon after, I started to write stories about the swamp fairies which I posted to my blog. The stories came in quick succession. Next, the dreams started. I began to channel the stories of the fairy nymphs that had inspired me that day long ago. Each day on my walks, I observed the real swamp as it was crowded out by the building of new homes. The natural wetlands were disappearing at a rapid rate. Slowly, a story began to form in my mind.

Fairy Swamp is found behind this development site in Pensacola, Florida

By fall of 2015, we moved to Colorado. The dreams continued and grew even stronger. The stories changed. The fairy nymphs wanted me to tell their stories. And, that is exactly what I have done. The Heart Stone Chronicles: The Swamp Fairy is that story, which I published this year. 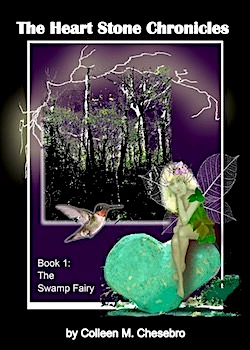 Today, I would like to share some of the ideas behind the symbolism in the story and my use of the number seven, rainbows, and ancient Greek Mythology that I sprinkled throughout the novel.

The number seven is significant in early folklore and Christianity. Seven was creatively used in many myths and fairy stories from our childhood. Snow White and the Seven Dwarfs is always the first fairy tale that comes to mind that used the number seven.

The Seed of Life, mysticalnumbers.com

The rainbow is a Christian symbol found in the Bible which has various meanings. Many believe that the rainbow is a symbol of God reminding us that we are never forgotten.

I chose to infer this meaning when my protagonist, Abby Forester, recognizes her mother as being part of the collective soul of the swamp fairy. The double rainbow is a rare weather phenomenon that I used to convey the message from Abby’s mother that she is always with her, not in person, but in her heart.

Just as the Christian meaning emphasizes God’s reminder that we are not forgotten, this same symbolism is implied when Abby sees the double rainbow and acknowledges that her mother is always with her. In this way, I hoped to inspire my readers to remember Abby’s story each time they see a rainbow.

Oread – Red: The Oread clan lives in the mountains.

Naiad – Green: The Naiad clan is found around bodies of water like springs and lakes, or swamps.

Dryad – Orange: The nymphs of the trees and forest are of the Dryad clan who inhabit the oak trees.

Hamadryad – Yellow: The Hamadryad live in many kinds of trees and die when the tree they inhabit dies.

Alseid – Violet: The Alseid clan inhabit the forests and meadows.

Meliae – Blue: The Meliae clans live deep within the ash trees that grow in ancient forests and fields.

Oceanid – Indigo: The sea-nymphs are from the Oceanid clan.

The use of the name, “fairy nymphs,” alludes to Greek Mythology where the nymphs were considered to be magical creatures. I called Rafe Cobb’s two Doberman Pinchers by the names of “Juno and Brutus,” to build on the links to Greek Mythology and reinforce that imagery in the story.

By using the symbols of Greek Mythology, the number seven, and the rainbow imagery in The Heart Stone Chronicles: The Swamp Fairy, I created a way for my readers to connect to their ancient belief systems. By incorporating these symbols, the story comes across as believable because these myths are taught to us from an early age. I also felt the symbolism helped Abby make her magical experiences more tangible to my readers. My hope is that Abby’s story will touch you and inspire in you a love of writing and magic.

I am a veteran of the United States Air Force, and a retired bookkeeper. When I’m not writing, I enjoy spending time with my husband, dogs, children, and grandchildren. When time permits, I also love gardening, cooking, and crocheting old fashioned doilies into complex works of art.

I live in the mountains of Colorado with my husband and my two sweet little-old-lady Pomeranians, Sugar, and Spice. You can stop by and visit me on my website. I’d love hearing from you.

Sign up for my monthly newsletter where you will find new reads from across the web plus a few creations of my own. Written, just for you, with fairy love and mindfulness, each month. Just fly over to my SIGN UP PAGE and enter your email.

CONNECT WITH ME – I love hearing from you!

About the book The Heart Stone Chronicles: The Swamp Fairy