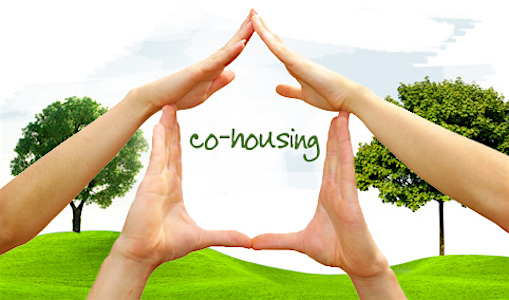 In this age of immediate connections though the ubiquitous i-phone, Facebook and other media, many people still long for “real community”.

A documentary on the radio today investigated co-housing, an experiment in community living. There are hundreds of projects currently up and running in North America. The particular subject of this programme, was the Harbourside Co-housing for Seniors, in Sooke British Columbia. Denmark first developed this concept in the 1960’s, but now there are many projects of different longevities, and more currently in development, in Europe, the UK, New Zealand, USA and Canada, among others.

Are these the descendants of the nineteenth century Utopian dreams that so often ended in disaster if they got beyond the pages of a book? The founders and members of the co-housing movement are careful to address practicalities. So far they seem to be remarkably successful, proceeding through a long and careful preparation period which includes considerable education of prospective participants.

The Co-housing Association of the United States’ website provides explanations and information. Under the heading Group Process, the first paragraph reads:

More than buildings, cohousing is about people. Successful cohousing communities spend as much time and energy on growing connections and attending to group process as they do to building and maintaining structures. A strong desire for collaboration and consensus isn’t enough; we need to learn and practice the skills to do it well. Periodic training in communication skills and conflict resolution along with opportunities to discuss deeper values and goals can help maintain healthy, strong relationships. Eris Weaver, Group Process Consultant

Some people call them a return to the best of small town communities. Others say they are like a traditional village or the close knit neighbourhood where they grew up, while futurists call them an altogether new response to social, economic and environmental challenges of the 21st century… Cohousing…describes neighbourhoods that combine the autonomy of private dwellings with the advantages of shared resources and community living.

There are leadership roles, but not leaders. The community is not dependent on any one person, even though there is often a “burning soul” that gets the community off the ground, and another that pulls together the financing… (if your community has a leader that sets policy or establishes standards unilaterally, it is not cohousing) The community is not a primary income source for residents. There is no shared community (communal) economy. Kathryn McCamant and Charles Durrett, 3rd North American Cohousing Conference Seattle 1997.

What strikes me about these analyses and descriptions is the emphasis on the education and training of those, who are setting up a new community: education that continues as a regular part of life in the cohousing neighbourhood. Co-housing is a very deliberate construction. Those of us, who have taken part in such educational programmes relating to our careers, will no doubt make their own assessment of their value. But perhaps the care with which the community is planned and built does preserve a balance between our modern desire for autonomy and individualism and our yearning for relationships that keep loneliness, that monstrous possibility, at bay. It seems that more and more of us (nearly 30% in the UK, I read recently) live alone.

However, there are many barriers for those who wish to participate in these experiments, the chief perhaps the need for the necessary sum of money to buy into the scheme. In spite of the attractions of co-housing, many people on their own are not in the market for it. Though co-housing projects for the elderly are increasingly popular (the details about Harbourside can be found at http://www.harbourside.ca) poverty frequently dogs the footsteps of a single person and they are obliged to adapt to an imposed solitude. Whether or not these communities are successful they remain for many a Utopian dream. There may well be every reason to be nostalgic about the traditional village or extended family for in those, everyone had a place and most a function, even though it might not be an enviable one.

For those who seek solitude for much of their time, as writers do, the company of a group of like-minded people via the internet offers bloggers and writers appreciated support and connections on sites like that of The Story Reading Ape. Keeping in touch with family, cultivating friendships, joining a few organizations and contributing to a couple of group projects provide enough community for me…but maybe I’m just anti-social!