Your mind is on fire as you type out your latest story at super-fast speed when, all of a sudden, you come to a halt. You want to include a date or a time period, and you’re not sure of the best way to express it.

Here are some easy guidelines to help you get started.

There are two simple ways to write a date but in fiction you should try to write the words out in full:

Always write dialogue the way your character would say it:

“She’ll be here on April the tenth,” said Mary.

Write a single year in numerals:

For a range of years, you can write the numerals:

But for fiction, you should try to write the phrase in full:

Those terms stand for Anno Domini (Latin for the year of Our Lord) and Before Christ.

A more recent development has been the less popular terms BCE (Before the Christian Era) and ACE (After the Christian era). That is sometimes referred to as the Common Era.

The rules for using these are the same:

You can also write out a phrase in full:

Write decades in numerals but with no apostrophe:

Write the word in full:

She attended school in the nineteen-sixties.

For fiction you should spell the word out in full:

If using the expression as an adjective, use a hyphen:

Alternatively, you may prefer to write the numerals.

If it is an adjective, use a hyphen:

Use capital letters for well-known and well-recognised periods of history, pre-history and the sciences such as geology. Here are some examples:

The Middle Ages, the Renaissance, the Bronze Age, the Jurassic Period, the Elizabethan era and the Age of Discovery.

More general terms should be lower case. Here are some examples:

Remember that you are writing fiction, rather than a textbook or article, so try to express the terms with as much elegance as possible, in a way that makes it clear and easy for your readers to understand.

I’m pleased to tell you that The Magus Covenant is now on special for US $1 (or the equivalent) on all Amazon outlets and other online bookstores.

If you haven’t read it yet, now is your chance to catch up in preparation for the release of the 2nd Jotham Fletcher mystery in late July. I have also updated the cover. 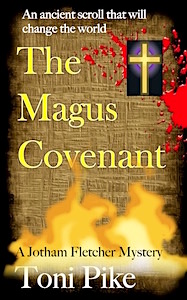 The fate of the world is in the hands of one man and the covenant holds the key.

The Reverend Jotham Fletcher is in Rome to give a lecture on his PhD thesis about Simon Magus at the church where he fell to his death beside the Roman Forum. Magus was a cult leader mentioned in the Bible and his libertine sect disappeared by 400 AD.

But did it really die out?

A robed man is pushed from the belltower of the church at midnight and Jotham becomes the prime suspect. His lover Antonella, an expert on ancient documents, has a shocking secret. Rumours fly about a papyrus scroll that mentions Magus. A ruthless Catholic Brotherhood will stop at nothing in their hunt for the Simonian Sect. And a reclusive billionaire has the chance of a lifetime to get his revenge.

Jotham is kidnapped, tortured and on the run. He races from Italy to England to Sweden. But the body count continues to rise and so does the heat in this non-stop thriller that will leave you breathless.

One reviewer on Amazon.com said:

“Pike set out to write a thriller of epic proportions and she knocked it out of the park! From page one, the characters are engrossing and clever. The plot line is action packed with more twists and turns than that street in San Francisco. Pike’s apparent knowledge of Italy and it’s law enforcement as well as the inner workings of the Catholic church is simply amazing. This is one of the few books I’ve read that I didn’t have the antagonist pegged by chapter three.”

The Magus Covenant can be purchased at the following online stores: