Hello. My name is Eleanor Mulder and I live in Western Australia with my family.

I think it was somewhere between the nappy changes and the breast feeding that I decided I was going to write that book. That book I’d always talked (and talked) about writing, but which had never progressed beyond a few random scribbles in various – now misplaced – notebooks.

If I’m honest with myself, up to that point, I really hadn’t a clue how to go about it, and a decent story idea would probably have helped. But for some reason, the story idea and inclination didn’t hit me until I was up to my neck in second baby.

Before my first daughter was born, I had dabbled around with a few short stories, but nothing had really grabbed me by the throat like the story that now seemed to burst from between my swollen milk boobs. This idea, born in the middle of the night, was the catalyst that — shortly thereafter — made me declare to the world that:

I’m writing my first book with toddlers in tow! 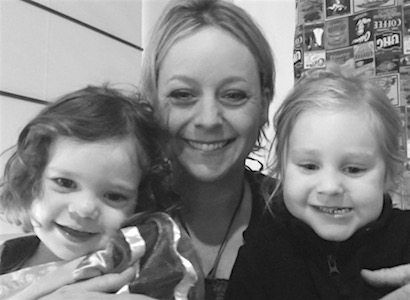 And I haven’t looked back.

Despite choosing the most frantic time of my life to write this book, I have realised that there really is no better time than now. 90,000 words and two and half years later (phew), I have nearly finished my first draft.

My book is called Jane Bardot, and it’s a mystery story, set partly in the 1950s, here in Western Australia.

It begins with a body of an unusual, young woman, abandoned among the tourists on Perth’s iconic Scarborough beach. Red lipstick smudged, full heavy skirts and a pillbox hat, she’s a girl from a different time – and nobody knows who she is. Except one old man. He claims she’s his wife. A wife who went missing in 1956…

I hope you will join me on my writing journey as I finish my first draft and start the long road ahead towards becoming a published author.

On my blog, I like to share my writerly ups and downs, as well as the many other thoughts I have while going about my frenetic day-to-day life. My blog is HERE.

I would also love for you could SIGN UP to my email list and become part of my BOOK LAUNCH TEAM. Be the first to read and review my book, and receive exclusive extracts in the lead up to its release:

Hope to see you soon