Born in August 1905, he left school at 12 to go to work on a farm. Not, you understand, his family’s farm, but a farm some distance away from his home. So far away that he was required to ‘live in’. He would, I have no doubt, have worked long hours, outside in all weathers. But he learned a number of skills that were valuable in later life. How to use and to take proper care of hand tools, how to work with animals, how to shoot rabbits and pigeons, both to limit the damage done to crops by these creatures, and to provide food for the table.

By the time I first met him he was working for the local council. Here his job involved cutting the grass verges along the lanes and highways of our rural district, keeping ditches, gulleys and culverts clear, assisting road repair crews, repairing damaged bridge and culvert brickwork. Whilst working the lane near to our cottage he would bring his ‘bait’ – the packed lunch consisting of sandwiches and a flask of tea – and consume it in our living room/kitchen.

I was just turned 13, home from boarding school for the Christmas holidays, when Mum announced that she was having his child and that, as soon as he could obtain a divorce, he would be coming to live with us, probably in a different house. This was potentially a big change in my life. Uppermost in my mind was the fact that my continuing attendance at Reed’s School depended on the fact that I had lost a parent. Did this new situation mean I would have to leave?

I was naive enough not to even consider the possibility that my mother was being duped by someone who had no intention of marrying her. As things turned out his wife refused to agree to a divorce, even though she was well aware of his adultery. Back then adultery was the only accepted ground for divorce but it required the consent of the offended party. If said party chose to be vindictive, the divorce couldn’t happen and the adulterer would be denied the opportunity to re-marry.

That is what happened in Harry’s situation. Months passed. Mum became pregnant again. Harry’s employer, however, came to the rescue. A house became available to purchase in the village and the council agreed to provide a mortgage, the repayments to be deducted from his wages. We moved into ‘The Manse’ at the end of the school summer holidays in 1956. I returned to school immediately afterwards and their second daughter was born in early October.

Over the next few years Harry worked hard to create a home for his new family. He kept bees, he cut and layed hedges for several local farmers, and he maintained two gardens. At the same time he carried out a great deal of DIY modernisation of the old Manse. Most people reading this will be aware that the word Manse usually refers to the home of the Minister of a non-conformist Church. In our case the Church was the village Baptist Chapel. The Manse was part of a building that also included a former school and the school master’s house. All three were now private homes, originally leased to tenants.

When the tenant of ‘The Manse’ had moved out, the trustees had decided to sell all three houses, two to the existing tenants and the third on the open market. The first thing that Harry and my mother did was to change the name of ‘The Manse’. Several options were considered. I, as the oldest child, was consulted. We settled on ‘Homelea’.

During school holidays, and every weekend and summer evening after I left school in 1958, I assisted with the many home improvements Harry undertook. This included the reconstruction of the porch around the front door, a new front garden wall and gate, the installation of a septic tank and flush toilet, providing a roof over the outside passageway that led from the back door to the toilet, the erection of a shed in the vegetable garden.

I mentioned that Harry maintained two gardens. Our garden at ‘Homelea’ was a joint effort, Mum and I both assisting with the work. The other garden belonged to an elderly lady who lived on the other side of the village. Harry maintained her garden in return for a share of the produce.

On the evening of Christmas Eve 1961, Harry cycled to this second garden to harvest Brussels sprouts for our Christmas dinner. I was due to cycle to the next village, to the home of my then girlfriend for a pre-Christmas drink. I agreed to wait until Harry returned. Shortly after he left there was a knock at the door. The gentlemen who stood there when Mum opened it informed her that Harry had been knocked off his bike by a passing car and that he was on his way to hospital. Our caller was there to take Mum to the same hospital.

Fortunately, the driver of the car that collided with Harry’s bike was a kind man, devastated by the damage he had inflicted, and could not have done more to assist Harry and the family in the aftermath of the accident. Over succeeding years he became a family friend. Harry sustained a complex fracture of the femur and was hospitalised for several weeks. Once recovered, he returned to work and his many exta-mural activities. In 1964 he was finally granted a divorce, and he and Mum were married shortly afterwards. They remained together until his death a few days before his 91st birthday in August 1996. 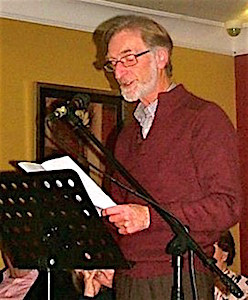 Frank Parker is the author of 4 self-published novels, and two collections of short stories. His short stories have appeared in print in three sort-run anthologies.