I’m very lucky to live in the south of France, but unlike a lot of ex-pats I’m not of retirement age. Work is seasonal and in the winter of 2013 I found myself unemployed and very frustrated by an unusually wet January. To stop me from climbing the walls, my husband suggested I write him a horror story. The tale got rather out of hand and grew into a two-book series – Language in the Blood. It’s a comedy about a young Scotsman, Cameron Blair, who goes off to fight in the First World War. Lying wounded on the battlefield, he is discovered by a vampire with inevitable consequences. The story follows Cameron as he comes to terms with his new ‘life’, from his first days as a hapless vampire in war-torn France to the glamorous modern day setting of the Côte d’Azur. Along the way, he develops a distinctive taste for the finer things in life: jewels, yachts, small dogs and champagne-infused human.

What started as a diversion is now a passion that takes up most of my spare time. My cat, Clicquot, is my main inspiration at the moment, but to be honest he is as much a hindrance as a muse. Despite his best efforts, I’m putting the final touches to my third book, a romantic novel for cat lovers called Conversations with Tom.

Since my first book started as a hobby and I didn’t want to spend a lot of money on it, I decided to take the self-publishing route. I was lucky enough to have an editor as a friend and her help has been invaluable. Self-publishing however has now become a philosophy. To have control over all aspects of the publishing process is rewarding but difficult. I’ve met many interesting people (virtually all online!) while learning about cover design, formatting your book for e-readers and print, and doing your own marketing. The list of jobs skills I’ve added to my CV is impressive! 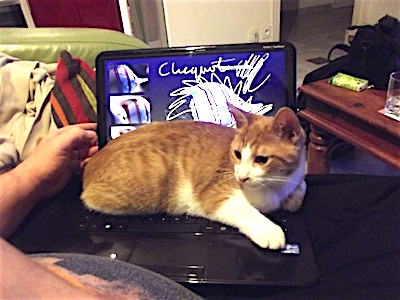 The best thing about writing is connecting with other writers who have taken the independent publishing route. Their advice and the shared experiences have been invaluable. Being a member of the Independent Author Support and Discussion group (IADS) has spurred me to write several short stories and I’m proud to be part of several anthologies: Holes, You’re not Alone and (with my friend Elspeth Morrison) Something Short. The last two were published for charity.

What drives me to keep writing are the wonderful reviews I’ve received from fans and colleagues; there really is no better feeling in the world than someone telling you they enjoyed your book.

Language in the Blood

Until the outbreak of the First World War, young Cameron Blair would have liked nothing better than to stay in Edinburgh and marry his childhood sweetheart. As the call to arms goes out, Cameron and his pals sign up to fight for their country. They are soon delivered into the nightmare of war, and there Cameron more than meets his maker.
The story follows Cameron as he comes to terms with his new ‘life’, from his first days as a hapless vampire in war-torn France to the glamorous modern day setting of the Côte d’Azur. Along the way, he develops a distinctive taste for the finer things in life: jewels, yachts, small dogs and champagne-infused human…

Language in the Blood is FREE via the following sites:

Find me online at:

See also my other books at: