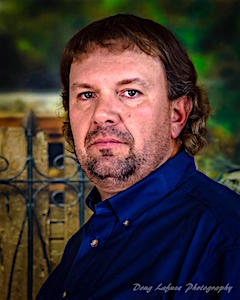 It’s hard to figure out how to start a piece on one of my least favorite subjects to discuss, myself! Do I start with where I was born, or when I first wanted to be a writer, or how about when I first started really writing? This is to promote myself as an author after all since my first book is now on Amazon so I could just start with what started me writing, but I feel like I should go back to the beginning.

I’m the first of three kids born into a farm family. My sister I were born in Oxford Ohio, but my parents moved to a small farm north of Williamsburg Indiana when I was nine. My brother joined the family there a few years later. I grew up working on the farm with Dad and raising Landrace hogs with my sister for 4-H. When I wasn’t busy I was wandering the woods on our place or riding my ten speed all over the county. I know I put thousands of mile on that old Schwinn! No matter what I was doing though, my mind was always wandering, creating stories and made up situations to deal with, which might explain some of the bonehead things I did as a kid!

I was bitten by the writing bug shortly after graduating from Northeastern high school, but I had no clue what I was doing. I had a messed up preconceived notion of how authors wrote books and when I couldn’t meet my expectations I became frustrated and gave up. I felt I had to settle for just dreaming about being an author someday. Life got busy, I expanded my hog operation, bought some farm equipment, took over farming my grandparents place, became a 4-H leader, and joined the volunteer fire department. I got married (twice), had two kids with the second wife, made some more bad decisions and ended up selling everything to move to Nebraska to work for a big farmer. Another bad decision! Not necessarily moving to Nebraska but the farmer I came out here to work for was a mistake. If someone has to advertise nationwide to find help, there’s a reason for it…

Fast forward about fourteen years or so to 2014. I am a single, out of shape local route truck driver, with two teenagers and a divorce in the works. I came up with yet another story idea after a text conversation with a “friend” and it began bouncing around in my head. With my life in turmoil, I needed a new start, something to focus on and a direction to head. Writing seemed like just the therapy I needed. The very night after the conversation, while the kids were at their mother’s for supper, I sat down at my laptop, this very one I am on now, and started writing the first rough draft for “Vigilantes”, a story about a couple of vigilantes with a romantic past who join forces to take on an international human trafficking ring. A few days later I shared what I had with a friend and she loved it! Bolstered by her praise, I continued on, but I soon learned a valuable lesson, don’t try and force the story where it doesn’t want to go! I was four chapters into Vigilantes and hating it. I knew where I wanted it to go, but it wouldn’t go there. I bogged down and eventually quit writing for a few weeks. I mentioned my story to another blogger and she offered some stern words of encouragement. As I mulled them over, I realized my mistake, scrapped the original four chapters and towards the end of July I started over, letting the story go where it may. Wouldn’t you know it, but the story flowed forth unabated and my friend loved it. By Christmas that same year, the rough drafts of Vigilantes AND Vigilantes, Back from Hell were done and awaiting the next step. I just had no idea what the next step was. I knew it was called editing, but was clueless how to go about that.

On January 28th, 2015 I read a blog written by an author whom I had been following on WordPress for a short while. It was called “A Writer’s Blog” and was written by Carole Parkes. It was about a female writer who was killed by a madman in her own kitchen, told from the victim’s perspective. I still have no clue what made me do it, because it was so bold and out of character for me, but that same day I wrote a blog called The View from the Other Side , told from the killer’s point of view. The very next morning I proofread it once more and posted it on my site, sharing a link with Carole on her blog. Even though it was rough, Carole liked my side of the murder, and a few days later, we were talking about writing a book together. In writing “Your Last Breath” with Carole I have learned a lot about writing, editing and publishing that I hope to someday to put to use in publishing some of my own books, which I continue to steadily crank out rough drafts of. I currently have nine different stories in the works and three I’ve been taking notes on to start writing later.

Right now, unfortunately, writing has to take a back seat to real life. While my son has graduated high school and is out on his own in the working world, I still have a very active sixteen year old daughter to get through school with all her activities. Couple that with working sixty hours a week, a house which needs lots of work, a dream of doing some distance bike riding, and a serious girlfriend, I don’t find myself at this laptop nearly enough. I had to give up my huge garden this past summer just to find time to finish “Your Last Breath”! I can find time to do most of my rough draft writing on my Droid Maxx during down time at work, but I can’t focus well enough to come up anything other than rough story lines. With “Your Last Breath” being published and already having received a couple of good reviews, the urge to write is stronger than ever. It might be a while before I publish again, but you haven’t seen the last of me!

And of course, the link to our book which is available on Amazon 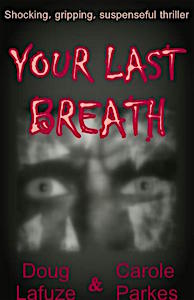