My name is Daniel Shumway, author of The Letter Thief.

I was born and raised in Seattle. I studied at the University of Washington and spent a year abroad in Barcelona. After graduation I worked as a waiter in a ski area hotel in Kitzbuhel Austria. In 1989 I moved to San Diego, and worked six years as a teacher in high school (teaching Spanish) and elementary.

I spent two years in Costa Rica in the mid-90s, first opening a store in San Jose, selling clothing imported from the US, and I spent a year on the Pacific Coast, teaching children of American and Canadian expats in a sleepy, beachside village near the Panamanian border.

In 1997 I travelled to Japan and I’ve been here ever since. I’ve been teaching English in a high school in Shizuoka city for five years. I have a Japanese wife and four children (the third time was twin boys).

I can’t recall how I got the idea for the Letter Thief, but I’ve always liked wordplay and rhymes. I get a kick out of telling personal anecdotes to my students, and making up stories for my children. When my daughter and first son were younger, I would put them to sleep with a bedtime story. For some reason I always wanted to tell a scary story but one night a story about a haunted house was too frightening and the kids started nixing the scary stories before I could get started. From then on our nightly story ritual went like this:

I told lots of stories and put a few of them, at least in outline form, on paper. If The Letter Thief becomes a big hit, I’ll use the confidence boost to write a few of those old bedtime stories too.

The Letter Thief is about a sneaky thief who carries around a bag of big letters, glowing red and blue. If the letter is red, it means he just ripped it off a word (an object, animal, person, etc.) and transformed it to something else. If the letter is blue, it means he’s about to change something by sticking it on the word. Imagine the shock and frustration of the main character, a boy about the same age as my twins (9), when everything around him falls victim to the old switcheroo. The book is great fun and I still get a cackle just reading it to myself. It’s educational too, with all the letter and word changing.

The illustrator for the book is the talented Mark C. Collins, a professional artist who has also authored/illustrated his own children’s books. You can see the quality of his drawings by clicking the “Look Inside” option on The Letter Thief Amazon page.

I hope you enjoy my book, and thank you! 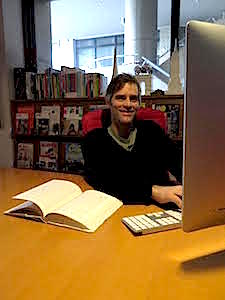