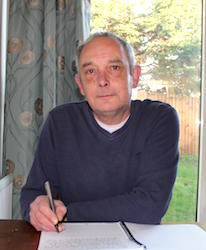 Hello to you all, I’m Clive, and first off, thanks to Chris for this opportunity to grace his famed and wondrous site.

Who am I? What am I? Now there’s a good question.

I live in the UK in the county of Bedfordshire in a small market town with my wife, son and dog. I have many interests that keep me from going totally insane; I love sports in general but mainly football (I follow Watford), and archery in particular. Sadly I no longer attend football matches but I am a regular at my archery club, shooting compound for those who wish to know.

Anybody who’s come across me in their meanderings through the ether of cyberspace might have come upon references to my former profession. I spent thirty years as a paramedic during which time I saw life, and death, as few people ever do.

The emergency services are renowned for their strange look on life, and their even more strange sense of humour, and I didn’t come away totally unscathed. I do have a somewhat warped view on life which in actual fact stands me in good stead for a variety of situations.

It was during my time in the ambulance service when I began to write. A good few years ago I was working a night shift, it was in the wee small hours and my crewmate was counting the Z’s. I had long ago realised that me and waking up quickly were two things that didn’t go together, so I never slept on a night shift. (Did I say sleep? I mean resting my eyes in a prone position.) I read during the slack time and one night I finished by book. I was now at a loss, what was I to do? I had a choice of either reading the Standing Orders; that is Uniform to be worn at all times, be presentable and basically don’t diss anyone in authority, (yeah right!) or start reading a text book – what at work? So I thought, I wonder?

I had a rummage in the office and found a load of scrap paper; I used to read a lot of fantasy at the time so I thought at least the research would be at a minimum, seeing I had no computer in them there distant days. I began to scribble down a few ideas which would eventually, after a good few years, turn into an epic fantasy of some 500 thousand words. I edited it and rewrote it and edited it again, but I was never truly happy with it. I think that was a learning curve. I still have it, upstairs, and perhaps one day I will return to it again. I enjoyed writing it and the people who read it enjoyed reading it, so I wrote another book. This was another fantasy, but this was aimed at the teenager. I wrote it on computer, finished it, was pleased with it and then the computer showed the blue screen of death. I hadn’t backed the bloody thing up properly, so I lost it, all gone, disappeared, vanished, never to return, ****! You live and learn.

An idea came to me which eventually became Banker’s Draft. I wrote it, was pleased with it, and lo and behold, I backed it up properly.

Then the fun really started.

Anyway, time for the plug.

If you asked me who in style it resembles, then loath as I am to pick an established author, I would pick two. It’s a sort of cross between Terry Pratchett and Tom Sharpe.

There’s been a murder in Gornstock and Cornwallis and his sidekick, Frankie, are brought in to solve the crime. After examining the scene both Cornwallis and Frankie adjourn to the pub, (they seem to spend a lot of time in pubs) where fate decrees they meet Rose.

What follows is a veritable romp through the streets of Gornstock where we meet all kinds of strange and quirky individuals. There’s Gerald, who ain’t really there; Dewdrop, the hapless feeler; Big George, the big brown bear; MacGillicudy, the Sergeant and Fluffy, the cat with attitude – plus a whole host of other strange and wonderful folk. Then we have the nasty people, but you don’t want me to tell you about them.

As Cornwallis, Frankie and Rose move the investigation forwards they find that there is more to the murder than they realised, their lives are in danger and they have to get to the bad guys before the bad guys get to them.

Where to find me

Available at the following stores

Plus many others, check your local ebook store.