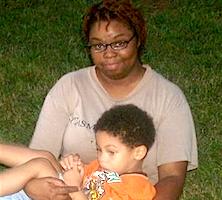 Hi! My name’s Antoinette Houston and I’ve published my first book February of this year! A story about a group of young adults who find out that they’ve been living a lie for the past eighteen years. It’s an Urban fantasy/Paranormal rated for young adults and up. It has fast paced action, suspense, romance and plenty of attitude.  It took me almost 20 years to finally publish this story. Got the courage when I realized that 40 was around the corner for me and I hadn’t done anything with any of my stories except write and rewrite them. I tried to go the traditional publish way but got scammed twice and became suspicious of anybody else. A cousin told me about CreateSpace and how he published two book through them with no issues. So I got myself together and just did it. It’s been a great ride so far. Since writing this story I’ve done two others and a sequel that wasn’t even supposed to be. Got into quilting but really into my latest hobby: leather working. great stress relief and a really good way to prevent writer’s block.

Rita found that she could manipulate fire, but her control was deteriorating. Her boyfriend, Wil, just wanted to enjoy being with her. Unfortunately her ‘baggage’ may prove to be too much. Ingrid wanted to help better the relationship between her brother and his foster daughter; Rita. But his paranoid antics were driving everyone crazy. Nikki thought his life was normal only to find that he, Wil, Ingrid and Rita had been living their high school lives over and over for the past eighteen years. Bobby, the cause of all the madness, has run out of time to find a solution to Rita’s problem. He was going to have to give them back their memories in order for them to realize the danger. That was only if he could convince them to over look their hatred for him.

You can find more information on me and my book at:

She slowly made her way around, searching for anything to help her enter. She came upon the stump at the very rear of the yard. A couple of feet from where the tree had been, the fence was crushed. A storm or something must have caused the tree to fall on the fence, giving her the opening she needed to get in.

Rita realized her mistake as soon as she was over the fence: she had no way to get back over from this side. She started to panic.  Gabe wasn’t going to come back until he saw smoke and he was true  to his word. She had to burn something for him to come back and help her out. She poked around and found some partially empty cans of paint and other flammable chemicals. They would give off more than enough smoke. She took out her lighter and picked up some scrap canvas that was on the ground. She had just lit it when she heard the growling behind her.

Rita didn’t like dogs and this one was huge. It was some kind of monster hybrid of mastiff and chow. It had a large head and big teeth, and the rolling growl it was giving did more than terrify her. Rita did everything she could to prevent a  scream from ripping free.

It happened immediately. Pressure built up in her chest and was released as she screamed when the dog moved toward her. Without warning, the fire she had started blossomed to an inferno. The flames swirled around her, causing her to become more panicked: now on top of being mauled by a monster dog, she was going to be burned.

But she didn’t feel anything. She opened her eyes to see the flames dancing around her like leaves in the wind. The dog, on the other hand, was whimpering painfully as the flames had singed it. Rita raised her hand toward the fire in stunned fascination and watched the whirling flames move further out from her, sending the dog scampering away in fear.

At that moment, her fear of Gabe vanished. She  was calm now that the dog was gone and she came to the realization that she wasn’t freaked out about this ‘ability’. She looked at her hands, watching the feathers of flames circle around her fingers then split off to rejoin the whirling flames about her. It was as if somewhere in the back of her mind she knew she could do this.  She simply never attempted to.

Rita looked around the yard and shook her head. She had no ill-will toward the junkyard owner so she wasn’t going to destroy it as Gabe wanted. Instead she headed back toward the fence, the flames winding about her. She looked at a spot on the fencing and watched the flames slowly burn through the metal. The fire went from rich red to blinding white as it turned the metal into liquid, creating a widening hole to give her escape. It was easy. She focused on the stump and watched the fire devour it hungrily. The smoke she needed to signal Gabe filled the air.