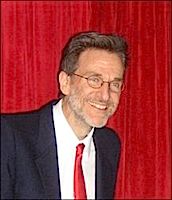 Hi, I am John Klobucher, the author of many technical manuals that you’d never want to read. But I have to admit to also being to blame for Lore of the Underlings, an ill-advised epic adventure penned in thirst-quenching liquid language and poured out for your consumption in a series of tasty little episodes.

I have plans for many exciting instalments of this lyrical Lore in the years to come. For more behind-the-scenes news and nonsense, including dramatic podcasts of this series, hie thee to this bloggery

I have also been known to paint a little, including the watercolors used in the cover art for Lore of the Underlings.

I live in Framingham, Massachusetts, USA with my wife Diane, son Sam, and daughter Mia. 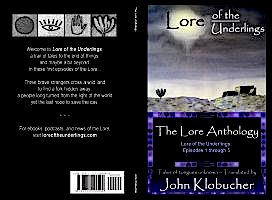 Welcome to Lore of the Underlings, a trail of tales to the end of things, and maybe a bit beyond. In these first episodes of the Lore…

Three brave strangers cross a wild land to find a folk hidden away, a people long turned from the light of the world yet the last hope to save the day.

The Lore Anthology includes Episodes 1 through 5 from the Lore of the Underlings series, a poetically heroic and comically apocalyptic episodic fantasy-fiction epic.

Lore of the Underlings: Episode 3 ~ Fyryx

Lore of the Underlings: Episode 4 ~ The Letting Pen

Lore of the Underlings: Episode 5 ~ Into the Pit

The eBooks and paperbacks are available on all major bookseller sites, including these:

May the Lore be with you!