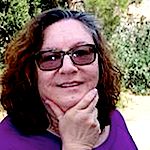 I’m the type of author that other authors resent. Not because I’m so talented. Oh, I’m competent enough but while other authors dreamed of being published I never wanted to be a writer. I ran screaming away from it but it chased me down over the decades and I should have given in long, long ago. But no, I wanted to work in the music industry from the time I was about seven years old.

That was when I first saw The Beatles on Ed Sullivan and I swore a silent vow that I would meet the “cute” Beatle, Paul McCartney, not as a screaming fan but on some type of equal level. And I did. Meet him that is; both he and Linda when I worked for their record company. He and Linda told me a funny story about a girl with my first name as I stood with them and the label’s president up in the penthouse. I was taught that one could do anything if they truly put their mind to it. I’m surprised my head didn’t explode.

But back to that writing thing. As many authors (not all mind you) will tell you it started with winning a writing contest in grammar school. Most kids would have been excited. I thought it was the silliest thing I ever had to do. I won which I thought was even sillier. I should have known right then. I ended up Executive Editor of my college newspaper. Then I ended up as a cub reporter for my local newspaper. News Director & air talent in radio. See? No matter how I tried that writing monster followed me. Which leads me to another opinion that many one-time journalist-now-authors might cringe over: I never considered news reporting “writing.” It was merely reporting facts accurately. No, ‘real’ writing for me was fiction. I mean it’s a totally creative venture. You create the world, the time, the characters and their stories from nothing but your mind’s imagination and creativity. It was also something I figured I could always fall back on should I need it.

Right about now, if you’re an author, you’re probably fuming and wishing you’d been chased down your whole life. Don’t hate me. I never had a choice really or even a chance. In 2009 I finally gave up, gave in, and caved. So far I have five novels published and a sixth soon to be released. Now I can’t imagine doing anything else and wonder why I waited so long. Let that be a lesson to you.

In between the entertainment industry and being a novelist I traveled to the four corners of the US and London and Scotland with side trips to Paris (don’t drool it was only a few hours but I did get to eat bread and cheese at the foot of the Eiffel Tower) and Brussels. I am of Gypsy heritage and traveling is in my blood; in fact when I’m home for too long a time, I actually get a yearning to go somewhere, anywhere. My dream is to visit the Middle East and my beloved Egypt—speaking of Egypt, that’s where my new novel is set: 2107 New Cairo Egypt, Earth. The Brede Chronicles is a sci-fi romance/adventure slightly on the edgy side. I am also a geekette—at one time I actually taught myself how to read hieroglyphs that’s how geeky I can get, lol. But I also don’t weigh a story down with too much science in my fiction. The story and the people who live it is what counts to me and hopefully to my readers (whom I love deeply). I may sound like an egomaniac but I am profoundly grateful that people like my books. That’s why I write them: to entertain people.

Along with traveling and writing I also love to garden indoors and out. My room is filled with houseplants all looking happily at the early morning sun though my outdoors is a desert that I am in a constant struggle to make bloom. Over the years I’ve had numerous dogs mostly Alaskan Malamutes but some smaller ones too; right now my baby is CupCake a little Malti-Chu (Maltese/Chihuahua) who is tiny yet ferocious and who I think wants to be a Covert Ops marine when she grows up! This dog does NOT back down.

Oh and lastly I love to cook! When I was seventeen I read the book The Little Girl Who Lives Down The Lane by Laird Koenig and among the several memorable lines I read the statement “…anyone who can read can cook.” It stuck with me and I can now boast there are few recipes or main dishes I cannot deliver up for anyone at any time! Another dream of mine is to hold dinner and cocktail parties at my house for authors—Thai food is my specialty! I would love to do that it would be such fun! I’d even send out real snail mail formal invitations!

That’s it, my life fleeing from writing. I did get to do some amazing things, go to amazing places and meet some amazing people and I wouldn’t trade those experiences for anything in the world. I think this is another phase in my life—this writing thing—the next phase and I’m glad that I finally am doing what I was supposed to do along with everything else. And I have to admit that this phase is pretty amazing too.

Find out more about Patti at: