Tracee Ford is an award-winning novelist. Her work is published by Injected Ink, an imprint of PDMI Publishing, LLC. Ford is a member of the Paranormal Romance Guild and her second novel, Idolum: Visions of the Undone, was nominated by the PRG for best paranormal romantic suspense novel of 2013, securing and winning second place. ​

Ford is a playwright, director, and puppeteer, but her life’s work has focused on child protection and family preservation. She has worked extensively with survivors of sexual abuse and has made it her mission to bring awareness to her local community through her career in child welfare.

As a paranormal investigator for The Southern Ohio Ghost Hunters, she helps families in her local area deal with paranormal phenomenon, teaching meditation, cleansing rituals, and basic blessing techniques. Her work with investigations lead her to BlogTalk Radio where she is teamed up with Willow Cross as the co-host of The Paranormal Hour, produced by World of Ink Network.

Ford writes paranormal romance, romantic suspense, and crime novels. She finished her first novel at age sixteen. Early works also include poetry. Ford’s nonfictional writings focused on her areas of study as an undergraduate in social sciences and psychology at Shawnee State University. She completed more nonfictional research and writing while obtaining her master’s degree in forensic psychology at the University of North Dakota.

Well, I’m a little wild. I’m a little crazy. I believe that absolutely anything is possible with just a simple dream and vision. That, my friends, is why I write. I love the worlds and characters I can create. I love watching them grow.

My first book, The Fine Line, went under construction in 2008 by accident. I lived in Southwestern Ohio across the street from gorgeous historical home. One summer night, there was a really bad thunderstorm.

A crack of thunder and then a flash of light; scared me to death. The next morning, my significant other and I walked outside and saw that the tree in across the street was struck by lightning, so we went over to tell the owners of that gorgeous home. 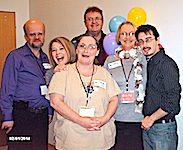 They invited us in. I fell in love with it and as I stood there looking at the original woodwork, I thought, “Wouldn’t it be cool if this place were haunted?” Thus, the idea for the book was born. Finishing the book took me until 2012. I submitted it to various publishers, finally finding BookLocker. This was not the best of arrangements, but it was a start. However, I learned this wasn’t the route I wanted to take for my second novel, then entitled Undone.

Undone was also started in late 2008 and took many twists, turns, and transformations before becoming the final product. It was a stark contrast from the content of 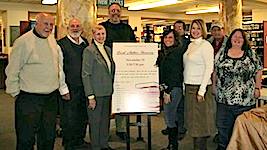 The Fine Line and much darker. The world of forensic psychology sparked my interest in writing this novel. The knowledge I gained during my graduate studies laid the foundation for the book and as I worked through that degree, my desire to complete the novel became a compulsion. However, life gets in the way I didn’t finish the book until April 2013. When it was published in August 2013 the title changed to Idolum: Visions of the Undone. 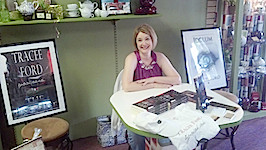 In February 2013, I spoke to Tc McKinney, founder of PDMI Publishing LLC. PDMI signed Idolum immediately even though it wasn’t quite finished. We also talked about my experience with BookLocker. I terminated my contract with them and handed The Fine Line to PDMI. They created a beautiful cover and a close friend, Richard Sprigg, edited the book. The book was re-released as Between Worlds Series (volume 1): The Fine Line.

As for the books’ details, the synopsis is the best way for you to experience what you could be missing by not reading the books. I will warn you, they are very different from one another. However, they are both essential for understanding the next book up for publication. BWS: TFL is the first official book in the series. IDOLUM is a stand-alone, however, the two main characters will be an essential piece is the second book in the BWS, Through Glass Darkly. So, with that, there are the book descriptions:

Between Worlds (volume 1): The Fine Line

Set in Southwestern Ohio, Dr. Matthew Gregory and Robin Hillard meet, fall passionately in love, marry, and settle into their newly restored historical dream home originally constructed in the 1800’s. However, their dreams of a happy life together are challenged by misfortune surrounding the purchase of the home. Soon, they realize that they have stepped into another world, filled with spirits, paranormal phenomenon, and unexplainable realities. The stark realizations as well as other traumas challenge their personal beliefs, the stability of their marriage and, most of all, their sanity. Matt’s logical, scientific certainties are defied when his daughter, Olivia, realizes she is a psychic medium and is able to communicate with the dead. Robin recognizes that her dreams are actually visions of the past directly associate with the previous owners of the home.

The Gregory family soon learns that there is a fine line between the world they live in and the world they can’t see. They seek direction through organized religion as well as through unconventional methods in an effort to understand the strange world of the paranormal. Ultimately, the family grows stronger and the relationship between Robin and Matt becomes unbreakable. They finally realize that they can face anything as long as they are together and have faith.

Idolum: Visions of the Undone

Dr. Lauren Harris, a brilliant and nationally respected forensic psychologist, is called upon by the FBI to help track down and stop The Phantom, a hedonistic serial killer. She is teamed up with Nicholas Bennette, an agent who has been promoted to the directorship of a Southwestern Ohio field office. At first, they find it difficult to work with one another, but eventually a passionate romance blooms.

Lauren has a special secret. She’s an empath and to solve the crime, she must not only rely on her training and education, but also her supernatural abilities to see through the eyes of the victims. She hopes to give a voice to the dead, peace to the families, and ultimately stop the killings. However, making sense of the visions proves to be one of her greatest challenges.

As time passes and the body count rises, Lauren fits the puzzle pieces together and discovers the identity of the killer. She soon learns she too has been targeted by The Phantom and comes face to face with him. When Lauren Harris finds herself at his mercy, she realizes she’s left much undone in her own life.

In January 2013, I was given the pleasant surprise that IDOLUM was nominated for best paranormal romantic suspense of 2013 by The Paranormal Romance Guild’s reviewing team. A first time author, with only two books available, and the book nominated was only out for three months; I was ecstatic. My work was up against that of a best-selling author, established in her field with many books on the market. I was very thankful when IDOLUM secured the second place slot.

I never imagined publication would spark other interests in me. I have my own YouTube Series focusing on paranormal topics airing once a month. I also connected with another talented author, Willow Cross, and am the co-host of The Paranormal Hour. On top of that, I started Dreaming Big Consulting to help other authors understanding marketing and promotion. I also opened my own Zazzle store during my one year anniversary with PDMI. I love community events, book signings, and other literary based activities. Networking is the key to success. My world never stops turning. I work a full time job, write as much as I can when I can, offer blog tours twice a year, and am raising a beautiful son. I support charities, including local food drives (Waverly Zombie Walk), The Breast Cancer Research Foundation, American Diabetes Association, The National Humane Society, and Child Abuse Prevention each day as I am an administrator in the child welfare system.

You can connect with me just about anywhere, too! I love to hear from readers and I am always looking for topics for my YouTube series. Here’s how to find me:

*Please note I have inventory on hand if you wish to purchase directly from me; that is possible