I am now inhaling deeply because I will have to hold my breath for quite some time. The Murder House, book, five in my Regan McHenry Real Estate Mysteries series, is on its way for initial editing.

It feels great to have written a perfect book. The problem is that I know from experience, my editor won’t think it is. He’ll complain about the book having run-on sentences, too many verbs, lapses in logic, and muddles where anyone not living in my mind has no idea what I mean. And that’s not even counting the punctuation errors he’ll find.

He’ll send it back wounded with red marks to show me where it needs work. I’ll be irate, of course; “What does he know?” And then I’ll breathe once more and get back to work.

We’ll probably do this dance several times. Hopefully his slashes will become less frequent with each turn around our ballroom and our Paso Doblé with be replaced by a nice Viennese Waltz. (Ok, I confess to having watched “Dancing with the Stars” last night.)

I spent some of my free time rereading my first attempt at mystery: The Death Contingency. It was a bad idea. I was learning to write during that book and it shows. I tried to do some re-editing, but it didn’t work well. The book has its moments and it gets better as it progresses, but it is what it is.

I improved as a writer with Backyard Bones and Buying Murder. Mostly though, I learned to listen to my editor. By the time The Widow’s WalkLeague was released, I had learned enough about writing and trusting those red marks that the book received an Editor’s Choice Award.

I took a time-out from mystery to write Mags and the AARP Gang, an often humorous book about a group of renegade octogenarian bank robbers, and listened to my editor. I’m not being an overly proud mama when I say, “It’s a good book.”

I’m supposed to tell you something about me ― please pardon my third person:

Nancy Lynn Jarvis was a Santa Cruz, California, Realtor® for more than twenty five years until she let her license lapse on May 5,, 2013. After earning a BA in behavioral science from San Jose State University, she worked in the advertising department of the San Jose Mercury News. A move to Santa Cruz meant a new job as a librarian and later a stint as the business manager for Shakespeare/Santa Cruz. Her work history reflects her philosophy: people should try something radically different every few years.

I’m also supposed to tell you why I started writing.

Well, the real estate market tanked in 2007 so I took a time away from it and pretended to be retired. My writing began as a time-filling game because I got bored. I picked the mystery genre because mystery logic appealed to me and I still had a soft spot for Agatha Christie and Dorothy Sayers, writers I fondly remember reading surreptitiously at my grandmother’s house when I was too young to be reading about murder.

I had written a book and put it in a desk drawer when a friend told me she was dying. She was a person who always wanted to be a writer. She made many starts on books, but never finished any ― she was always discouraged by the mentors, critic circles, teachers, and the other gurus she insisted on asking for advice ― and she said her greatest regret in life was that she never saw her name in print.

There wasn’t time to try the traditional publishing route. My husband and I threw together a micro-publishing company and printed one-hundred copies of the mystery I had written. Charlotte got to see her name in print in the dedication before she died.

I expected the other ninety-nine  books to live in our garage in perpetuity, but I was too tidy a person to be happy about that. I took them to a bookstore owned by a boy-now-man who was a Cub Scout to my Den Mother and pressured him to stock them. The darned books sold; we printed more and I never looked back. 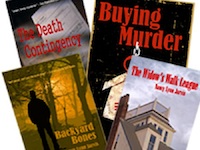 I’m supposed to tell you more about the books, but I’ve already rambled on for too long. If you want to read opening chapters, you may at my website