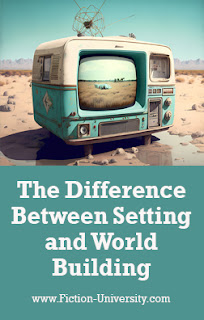 Your novel’s world will change the look and feel of every setting in that world.

Where is your novel set? It’s a basic question every writer can answer, either with a simple location or a description. For example, it’s set in New York vs. it’s set in an alternative Atlanta where magic and technology battle in waves over which one has control.

But look closer at those answers. One is a location, the other is a world.

“New York” can exist in any novel set in a big city. It gives readers a general sense of where the story takes place and what it looks like, but there’s a huge difference between New York in 1763 and New York in 2023.

“Alternative Atlanta” gives you a world that suggests far more than a basic setting for a story. Magic and technology, battling for control, which naturally leads to imagining the kind of people who live here and the problems they might face. It even says what genre this is. (For the curious, this is the world of Kate Daniels in Ilona Andrews’ urban fantasy series)

Setting and world building are often used interchangeably, but I’ve found it helpful to look at them as two different aspects of a novel.