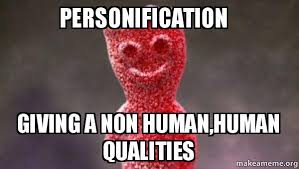 I’m going to touch on two things this week: PERSONIFICATION and ANTHROPOMORPHISM.  These two literary tactics get mixed up a lot because they’re very similar.  Even the image above isn’t giving the full story.  So, let’s start with the first one.  What is Personification?

Simply put, Personification is when a non-human demonstrates human qualities.  This could be an animal or object.  It doesn’t even have to actually demonstrate the quality, but be given it by the author or another character.  Betting everyone has something in their head right now, but we’ll see if it’s this or Wednesday’s topic.

Personification is fairly easy to figure out and common.  So much so that it gets taught in K-12 programs while anthropomorphism isn’t touched on.  This might be another reason the two are treated as one and the same.  It’s simply easier to say every non-human with a human trait…

One thought on “Using Personification in Fiction”

Except where otherwise noted, content on this site is licensed to Christopher Graham (aka, The Story Reading Ape), under a  Creative Commons Attribution-NonCommercial-NoDerivatives 4.0 International License.
Join 18,945 other subscribers