We head up through Florida, passing housing tracts, shopping centers, vast properties in pseudo ‘hacienda’ style, and so many of those water-guzzling golf courses that are kept green by vast quantities of herbicides and pesticides (four to seven times the average amount used in agriculture). Right around them, are tidy neighborhoods where golf course runoff causes asthma, headaches, rashes, birth defects, learning disabilities, infertility, and various cancers. Apparently this is common knowledge, but doesn’t it bother anyone?

People are more raucous on the buses in Florida, and the squawks and rustles seeping from bad headphones are very audible — something bus drivers are quick to condemn elsewhere. The drivers, too, are unfriendly, as if we are the bottom of the barrel. As one woman explains: “In Florida, everyone’s all obsessed with cars. Only transients take buses.” 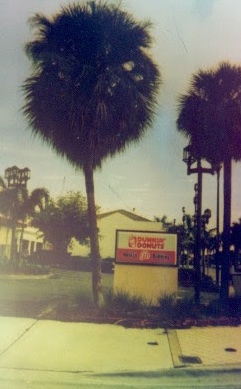 This attitude certainly won’t help the environment. Single occupant cars produce 80% more carbon monoxide per passenger mile than buses. Bus and train travel is one of the best ways to reduce greenhouse gas emissions, road congestion, and to reduce the great number of animals injured or killed while crossing roads. Just think about all the countryside that’s being swallowed up by new roads. However, such a change in mentality is unlikely: federal investment has always boosted the road system; suburbs and cities are built around the car; people equate car ownership with personal freedom.

Travelers really are calmer once we leave the state. “People down in Florida?” Martin, our new driver smirks. “They’re spoilt because they have it too easy. Get hungry? Pluck an orange. Besides, everyone’s in a holiday mood. There’s no restraining them. What I do is treat people like little kids. They don’t obey, after the third warning I go over and take away their ‘toys’. Other drivers, they just pull off to the side of the road until the person stops behaving badly. That way, the other passengers put pressure on the offender.”

The last time I traveled this way, was back in the 1950s, when, with my parents, we took U.S. Highway Number 1 from Canada to Florida for the annual holiday. I remember the dense vegetation along the highway, also the rows of cardboard boxes in which people — largely African Americans — lived. It was a strange sight for Canadian eyes — although, as a child, I thought that inhabiting a cardboard box would be far more fun than life in a normal banal house. 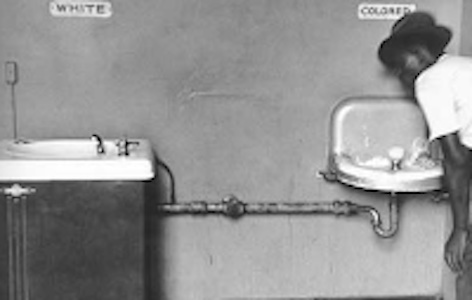 Equally strange to Canadian eyes were the separate drinking fountains and toilets: good ones for whites, small, dirty ones for blacks. But, despite the widespread belief that Canada was very different from the USA, it was not uncommon for Canadian restaurants to refuse service to people of color. In Windsor, in the early 1950s, the United Auto Workers-Congress of Industrial Organizations filed a complaint against a café that refused to serve a black member of the Canadian armed forces.

I intend to stop for the night in Brunswick, Georgia, but Martin tells me that all reasonably priced motels are miles from the bus station. “Savannah is better,” he says. So I climb back onto the bus, find myself seated in the vicinity a loud know-it-all who, after a short visit to the British Isles is intent on giving us the ‘facts’ — all of them incorrect. Seated around her, a fascinated gaggle of women are taking in her every word.

“In England, nobody speaks English. Below London, everyone speaks Cockney; above London, they all speak Geordie. There’s this island in Scotland where, when the tide pulls out, it leaves it stranded. The castle there was built by Muslims, but then it was conquered by the Vikings.”

She’s referring to the monastery (not castle) of Lindisfarne, which dates from the 6th century (Islam originated at the start of the 7th.) In 793 and 875 Vikings did indeed sack Lindisfarne, and the monks abandoned the site. Yes, there is a castle, but it was built with stones from the ruined priory. But our loquacious lady is ready with even more fake news: “The British medical system is way behind the American system. They don’t have important drugs or pain killers, so people just have to suffer and die.”

She’s obviously never heard of Britain’s National Health Service, implemented in 1948. Nor does she seem to know that health care facilities in the United States are largely owned and operated by the private sector, and that the prohibitively high cost of medical care results in Americans delaying, avoiding, or stopping medical treatment altogether. In 2018, 27.8 million Americans had no health insurance.

On and on she goes, misinforming, deforming, spilling out falsehoods with all the confidence of a snake oil saleswoman. I think — only very briefly — about intervening, but know that’s the hill I’m likely to die on. Instead, I chat with the rather ancient African American woman by my side: she can’t be bothered listening to big mouth.

“What were you doing down in Florida?”

Is this an explanation? If so, it’s a confusing one. But seemingly untroubled, she goes on to name at least six other children living all over the USA. “I also once worked for the social services removing children from their families — potentially a violent job. You take kids away, parents gonna get angry. But those children I saw… malnourished… abused. Yes, I sure saw some ugly things. What can you do? Laws is laws, and they’re made for everyone so you can keep order.”

Across the aisle is a curly-haired blond wearing huge eyeglasses. Thick black lines of makeup surround her eyes, her purple lipstick bleeds around a mouth with far too many teeth, and purple polish adorns the tips of beautiful long fingers. Her tiny Lolita figure is clothed in giddy preteen pink net ornamented by sparkles — a strange frock on a bus headed for snowy climes. Yet, she is hardly young, the grey roots of her hair testify to that. She is wonderfully strange-looking, fascinatingly ugly, and quite definitely a beauty — what one would call, in French, a jolie laide or a beautiful ugly.

She is deeply absorbed in a romance, and I wonder what her life is like. Does she dream of true love and passion on tropical islands? Is that window dressing an effort to find Prince Charming? Is she lonely, or does she have an ardent lover who appreciates her efforts?

In the end, at one of the stops along the way, I discover she is chatty and open. She’s on her way to wintry Cleveland where Tom, her sweetheart, will be waiting for her at the bus station. He’ll have warm clothes with him — she didn’t want to walk around Miami lugging a suitcase. Anyway, she wasn’t in Florida for very long: she flew down on Thursday. Now, on Saturday night, she’s on her way back by bus, a fifty-hour trip.

I must be staring at her in astonishment, but she only smiles.

“I had a great time. I never been to Florida before. Everybody’s always talking about how wonderful it is and I was dreaming about it for years.”

“Why not stay for longer?”

“Can’t. I work part-time cleaning, and you don’t get no holiday time if you’re part-time. The lady I work for told me if I take off longer, I won’t have a job waiting for me when I get back.”

She also has another full-time cleaning job, and gets a week’s holiday every year — unpaid, of course.

I am appalled. Living on a continent where everyone has the right to four or five weeks paid vacation, I had forgotten about this aspect of American life. Yet, she’s a delightfully cheery woman, accepting all with good nature. Life is just like that. She is so charming she has me wishing I were a fairy godmother with a magic wand to sweep her into Wonderland. But I’m not.

So, silently, I wish her many delightful romance books, and I keep her in mind every time I write one.

2 thoughts on “The Book Tour Episode Twenty: Those Met on Buses – Guest Post by Jill Culiner…”