However did I end up here?

That is a question I frequently ask myself. Was I destined to become an author? If so the gods in heaven weren’t on my side that day.

‘Oh, but being a writer… it’s so romantic,’ are the words I hear on all sides.

That’s so far from the truth, the truth isn’t even in the same room. To begin writers need huge confidence, something they rarely possess; an ability to cope with criticism without flinching; eternal optimism despite their books not selling, patience, a capacity for hard work plus a delusionary nature which allows them to ignore the dust in the house by calling it ‘interesting

So how did I end up as a writer?

I blame my mother who introduced me to cricket when I was eighteen. Up until then, my life had been pretty ordinary. School which involved playing tennis and chess for the school team, and piano lessons at home … nothing that would actually set the world on fire. Cricket did that. I even remember the dress I wore; it was lime green. 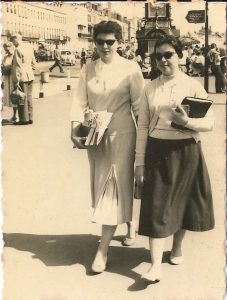 So why was a game cricket so earth shattering, other than it being a test match between England and the West Indies? Because it changed the direction of my life. Not immediately for I was only eighteen, but slowly and gradually as I listened to matches first on the radio and then watching on television. By my early twenties I was using my Saturdays and Sundays to travel to matches throughout England.

By the summer of 1967 – that is when my personal tsunami took place. Deciding I couldn’t wait until next summer, and having saved some money, I travelled out to Barbados in the West Indies to watch a Test Match Series … and never returned! At least that is what I tell schoolchildren when they ask. Yes, of course I did return, but not until the 1980s when I returned to England to bring up my daughter. 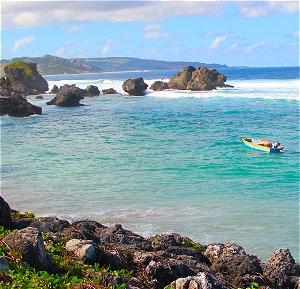 In the interim, I worked first in Barbados and then as headteacher in a secretarial school in Grenada, before moving to New York. Still my favourite city on earth, there I spent two very happy years, mostly I confess at Lincoln Centre listening to opera or at a theatre on Broadway watching a musical or a play. At the time I was working for a yachting company, commuting between New York and Grenada, and then I joined a US technology company who first transferred me to London before sending me to Japan where they sacked me. Re-engaging me next morning after a night I spent in tears, plucking up the courage to tell the president, you can’t sack me because I have clients to look after, he was so impressed at my standing up to him, he sent me as manager to Greece. 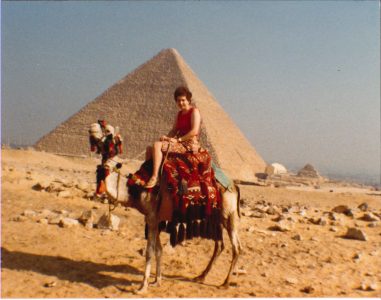 What fascinating years. I was present at the Black Power Riots in the West Indies, the overthrow of the military junta in Greece and the war in Lebanon. Our hotel in Beirut, the Phoenicia, which was later bombed, was ringed by soldiers, tucked behind gun emplacements made from sandbags. With pot shots being aimed at anything that moved, and news that an air steward had just been shot, I left Beirut with my boss sitting on the floor of a taxi cab … and most likely praying, although I don’t actually remember that bit.

Had I done any writing by then? Only magazine articles for which I was paid the grandiose figure of £25! But shortly after returning to the UK, I did begin to write for children because … as my daughter is fond of saying: after all that excitement, tap-dancing and watching me train for swimming doesn’t exactly cut it, does it Mum?’

Following the publication of ‘Scruffy’ I began visiting schools and giving talks, honing my craft by attending courses on story-telling and editing. And then wanting to spread my wings I began to write thrillers for YA’s – Running, Time Breaking, Turning Point and Kidnap and those took me to book-signing events in Waterstone’s stores and of course more and more schools.

Then in 2015, exhausted from coping with the traffic in our overcrowded country, I decided to quit. That’s it, it is time to get out into the real world and meet people. I maintain to this day, had I not had a sat nav, I would still be sitting on an island in Hemel Hempstead searchiing for the road back to the south west. And my acquiring of such a modern convenience as a satnav was, I promise you, an act of sheer desperation. Before then, I might well get myself to the right town, but the right school? In big cities primaries are hidden away in backstreets and I had become famous for dumping my car at the side of the road, driver’s door ajar, and chasing a postman on a bicycle or a dustcart, calling out where is so and so school? One lorry driver took pity on me and drove me 3 miles out of his way and on another occasion, so did a passing driver. (It must have been obvious even then that I had no bump of locality and was not cut out for this.) But being a typical writer I had to go out with a bang; my swan song, ‘Age and the Antique Sideboard’. Written for the over fifties, these were short stories and blogs from my adventures liberally besprinkled with the most glorious cartoons. 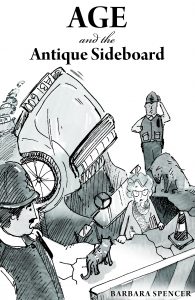 And then, planning a quiet retirement, one morning in 2015 I picked up a notebook and wrote a paragraph. Why? Because I had read ‘Girl with a Pearl Earring’ and wanted to write something similar that was equally intense with memorable characters. As a result of that paragraph, I changed my style, genre and age group. 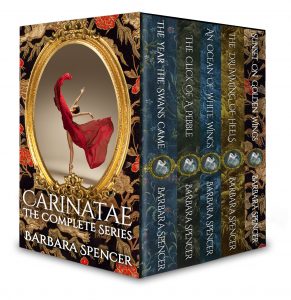 There are five books in the complete series, starting off with The Year the Swans Came. Sunset on Golden Wings, the sequel comes at the end and ties up any loose threads, and says goodbye to the many characters whose lives you have followed. Yes, they can be read as a duology and then a trilogy or from 1 – 5, each story adding to the world in which the carinatae have become rulers of land, sea and air.

Have I created memorable characters? You will have to answer that. Are they my best work? Well, if it’s anything to go by I fell in love with one of the characters!

Oh, and by the way, I still don’t possess any confidence and I can’t cope with criticism. But I do work hard and I definitely ignore the dust. 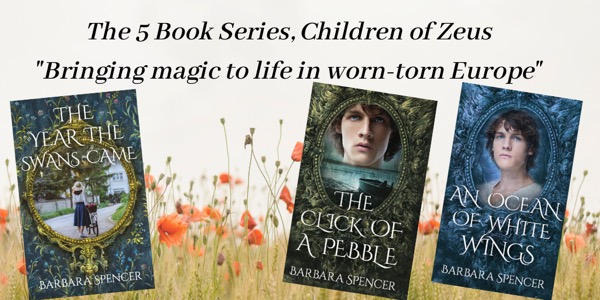 14 thoughts on “However did I end up here? – Guest Post by Barbara Spencer…”