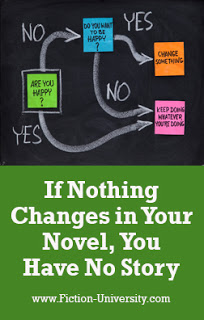 No matter how exciting a scene might be, if it doesn’t change anything in the story, it’s not doing your novel any good.

If there’s one thing that’s constant in all novels, it’s change. No matter what genre, a character experiences a series of events and things are different by the end of the tale. The more character-focused the novel, the greater and more personal this change is likely to be, but it appears in even the most plot-centric books as well.

The “big change” is what the book is ultimately about, but changes exist at every structural level of the novel. Plot events change how characters act, character realizations change how the plot unfolds, information revealed changes how readers and characters see and understand the story itself and the people in it.

What if things don’t change?