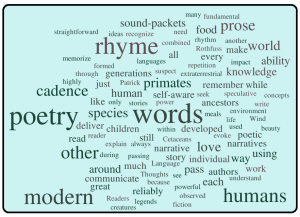 Poetry comes in many forms. In fact, Writer’s Digest University lists 100 of them: List of 100 Poetic Forms for Poets.

However enticing that rabbit trail may be, today’s post will cover only a few of the most common and well-known forms. The rhyming scheme of poetry is traditionally shown by using the first letters of the alphabet, such as: AABB

Another word to know is what we call a stanza, or how we divide our poem. Literary Devices says: In poetry, a stanza is a division of four or more lines having a fixed length, meter, or rhyming scheme.

A few of the most common poetic forms are:

Elegy  – a poem or song written to honor the life of someone deceased, such as W. H. Auden’sIn Memory of W. B. Yeats, the opening lines which follow:

He disappeared in the dead of winter: