Have you ever set out to write a long series? I haven’t. I’ve had two trilogies manifest organically out of what was intended to be stand alone novels, but I’ve never committed to anything longer.

With my reader hat on, I see a lot of long series coming out since self-publishing became a thing. A large portion of modern writer’s advice is based on this model, pricing first in a series books at cheap or free to get people hooked so they’ll pay a bit more to continue.

The trouble is, not everyone can sustain a series. I can’t count the number of times I’ve got a free first in series book, enjoyed it, then was disappointed by subsequent books in the series. This isn’t always the case. There are some writers who can rise to the challenge, but I think any writer thinking of producing a long series needs to realise that it isa challenge!

First of all, the author has to think of new ideas continuously throughout the series so that each book isn’t just a clone of the previous one. Multiple writers who have tackled this beast have told me that’s actually more difficult than coming up with new ideas for new novels. As a matter of fact, one of the problems with doing a series is getting locked in when the ideas for new stories are flowing.

A well-known example of this is George R.R. Martin and his Songs of Ice and Fireseries. It’s an example of a series written well and I’m a big fan but… fans are still awaiting the last two books. The first book, Game of Thrones, was released in 1996. In 2019 we’re still waiting to see how it ends. As a matter of fact, most of us are watching the television series instead, as it has passed up the book series.

How many books and anthologies has Martin released between series books? Not to mention books related to the series but not part of the sequence. One of his short stories written in 2019, Nightflyers, is set to become a Netflix series. Great for him, but what about the rest of the Ice and Fireseries?

The point I’m making here is that a long series is a big commitment. Sure there are Romance series that churn out a book a month with variations on a theme that keep that audience happy, but even those have to come up with enough new direction or elements to retain reader interest. When the quality of the story goes down, so do the sales figures.

In a Fantasy series like Song of Ice and Fire, the convolutions of multiple strands of plot can get out of hand. I’ve seen comments on book groups from people who have abandoned the series part way through. The question is, how many fans will buy the final books, assuming they are ever released, after seeing the end of the television adaptation?

Personally, as the stories have diverged significantly between book and television versions, I feel I’ll need to read those final books to see what Martin actually wrote for plot strands that were dropped by television writers. 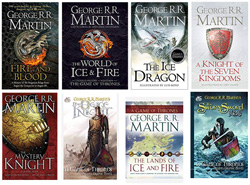 Taking a different example from a lesser known writer, a time travel series I follow has just released the ninth of a ten book series, possibly to the relief of many as there was a time gap between the eighth and ninth story. The Chronicles of the Harekaiianby Shanna Lauffey, or the Time Shifters Chroniclesif you’re reading paperback, is a good example of a well-sustained series.

The books are novella length, very different from the massive brick volumes of Ice and Fire, but new characters and events have been neatly woven in to keep the series from becoming repetitive or stale. The cover art work is rather interesting too, displaying variations of time pieces in the tradition of time travel novels. Although these books have some intricate convolutions of plot that span across multiple episodes, as they are dubbed for this series, they have been making sense in a way that I think will appeal to a wider audience than the tangle of plot threads Martin left us with in the last released book of his series.

Just because marketing advice favours a series doesn’t mean it’s the only way to go. To me, the idea of a series is sort of like the puppy for Christmas. It brings with it responsibility for upkeep and a long term commitment. I had a few years between the first book of my Goblin series and the following books because of a diversion into filmmaking, so I’ve had a taste of the weight of that commitment.

Watching the progression of George R.R. Martin’s book series, both as a reader and as a writer, I think a trilogy is as far as I’m personally ever going to commit to, but that doesn’t preclude adding books within an established world. Many series, like Anne McCaffrey’s world of Pern, started out as a trilogy, then added a second trilogy, then stand alone books in that world. I’ve considered doing something like this with Goblins, though I feel the pressure to finish my Steampunk trilogy first and I have another Fantasy trilogy taking form at the moment.

How about you? Do you write a series? Have you contemplated writing one in future? What is your experience of series as a reader? Are you waiting for the final Ice and Fire novels like many of us? Or following a series that never seems to end? Let’s talk about the phenomena of series books.