The online edition of The Oxford Dictionary defines nonsense poetry as follows:

(Originally) whimsical or nonsensical verse; (later) the genre of poetry that includes nonsense verse such as limericks, as well as looser poetic forms”.(https://en.oxforddictionaries.com/definition/nonsense_poetry).

The best known (and loved) writer of nonsense verse is the 19thcentury english poet and artist Edward Lear,(https://en.wikipedia.org/wiki/Edward_Lear).The best known of Lear’s poems is, undoubtedly the wonderful “The Owl and the Pussy-Cat”,(https://www.poetryfoundation.org/poems/43188/the-owl-and-the-pussy-cat)),in which the poet describes the journey of these 2 creatures “in a beautiful pea green boat” “to the land where the bong-tree grows”, where they are married “by the turkey who lives on the hill”. Of course they where, for what could be more natural than for a cat and an owl to sail the seven seas and marry on reaching journey’s end! It is the nonsensical nature of Lear’s verse which endears his work to both young and old.

As mentioned above, “The Owl and the Pussy-Cat” is Lear’s best known nonsense poem. Lear did, however produce many limericks and other forms of nonsense verse, many of which can be found in his “A Book of Nonsense”, which can be downloaded, free of charge from the Amazon Kindle store,(https://www.amazon.co.uk/dp/B004UK2JO6/).

Amongst my favourite poems to be found in “A Book of Nonsense” are the following 2 gems:

“There was an Old Man with a poker,

Who painted his face with red ochre;

He made no reply,

But knocked them all down with his poker”.

And quite right too in my opinion, for everyone should be entitled to cover their face in red oker. Indeed it should, in my opinion be positively encouraged!

“There was an Old Person of Cromer,

Who stood on one leg to read Homer.

When he found he grew stiff,

He jumped over the cliff,

Which concluded that Person of Cromer”.

One can only hope that his copy of Homer’s works escaped damage and was not swept out to sea as a consequence of his descent from cliff top to beach! 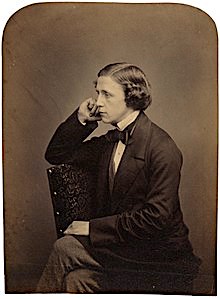 Lewis Carroll(https://en.wikipedia.org/wiki/Lewis_Carroll)is, of course best known for “Alice in Wonderland” and “Through the Looking-Glass, and What Alice Found There”. Carroll was also a writer of nonsense verse, much of which appeared in his children’s books. For example his poem “Jabberwocky”,(https://www.poetryfoundation.org/poems/42916/jabberwocky)can be found in “Through the Looking-Glass”. In the poem Carroll describes the hunting and killing of the fearsome Jabberwock. “Jabberwocky” is highly amusing. However the poem is also interesting as Carroll employs nonsensical language to great effect, as in the opening lines of “Jabberwocky”:

“’Twas brillig, and the slithy toves

Did gyre and gimble in the wabe:

All mimsy were the borogoves,

And the mome raths outgrabe”.

Anyone who wishes to find sense in the above lines is on a losing wicket! For instance what, exactly are “borogoves” or “mome raths”? Answers please on a postcard!

I am, myself a writer of nonsense verse, including the below poem, “The Poet and the Workman”. The poem flows from a real incident which took place some 10 minutes or so from my home in the Upper Norwood area of south-east London. I was returning from my local supermarket when I came across some pavement works (a big hole taking up part of the walkway). I am blind and a guide dog user. Seeing my dog, Trigger pause and consider how to proceed, a kind workman helped me past this partial obstruction. On reaching home I imagined a humorous exchange between a workman and a poet, hence the following poem:

Workman: “Because I can,

While those who are not able

Sit at a table,

Trying to make their verses rhyme”!

Poet: “I have a plan

To make my lines scan.

And I will be on my way

To versify the livelong day”.

“Workman: Why bless my soul

So intent was he on his goal

That the man’s fallen into that there hole,

To be a rhymer is most perverse”!

(“The Poet and The Workman” can be found in my collection of poems, “Refractions”, which is available in the Kindlestore, https://www.amazon.com/dp/B01L5UC2H2/.)

Kevin Morris is a poet and author. He was born in Liverpool on 6 January 1969. Having obtained a 2/1 (joint hons) in history and politics, and a MA in political theory from University College of Swansea, Kevin moved to London in 1994 where he now lives and works. He began writing poetry seriously in 2012. Kevin’s latest collection, “The Writer’s Pen and Other Poems” can be found at,https://www.amazon.com/dp/B07GD1LBMV/.To listen to Kevin reading from (and discussing) “The Writer’s Pen” on Vancouver Co-op Radio’s The World Poetry Reading Series, please visit.http://worldpoetry.ca/?p=13500

Except where otherwise noted, content on this site is licensed to Christopher Graham (aka, The Story Reading Ape), under a  Creative Commons Attribution-NonCommercial-NoDerivatives 4.0 International License.
Join 15,730 other followers