Hello Fans and Friends in the land of Zen! My name is Zoe and I write stories for your amusement. I hope you all enjoyed the holidays. Emily and I send you our warmest wishes for health and happiness in the coming New Year. Wait! Now that I’ve put that down on paper, it occurs to me: That’s the silliest sentiment ever, isn’t it? I mean, why wish good health and happiness for only a year? I guess one could argue that the wishes get renewed every year, and so an annual greeting is just dandy, but, think about it. What if I got hit by a truck tomorrow? Just sayin’ . . .

Alrighty then, enough of that. I better get on with this month’s story, which I’d like to tell in a slightly different way. Every now and then, I fancy myself a poet – you know, kind of the way my human, Emily, fancies herself an artist.

Anyway, I hope you enjoy this little ditty, penned with love from your favorite kitty!

Joined me for a night-time stroll, and we came upon this hat.

It didn’t look really all that big; still, it sure did look inviting.

At least to me who loves to leap into boxes and any small thing.

Can you imagine my great surprise, when Bella jumped in, too?

I felt sure there was not sufficient room, then inside the hat Burt flew!

The three of us in that little round hat. Yes, I know; it’s hard to believe.

We were face to face, and oh-so close, it was hard to even breathe. 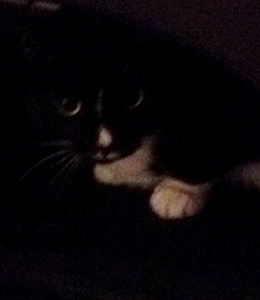 Seemed no way to get out of it, though we didn’t even try.

Because, before we had a chance to think, the hat twirled and took to the sky.

We soared above the stars so bright, the hat quickly toing and froing.

But we had no fear of falling out, no fear about where we were going.

We were sure on one strange adventure, of that there was no doubt.

We had no idea that soon enough, that hat would kick us out.

It dumped us in the middle of a raging revolution.

The Leader of this barren land, banned his people from communion.

Now they were standing up as one, to demand he capitulate,

And repeal his edicts of hate and fear, which love would not tolerate.

We all knew which side to take, we’d seen this fight before.

Still it was sad to realize, another Leader wanted war.

We joined the crowd until the hat returned to take us home.

Or so we thought, but the hat kept flying; I was glad I wasn’t alone.

And then a sweet voice filled the air, and we listened carefully.

She sang that every soul evolves, from now ’til eternity.

She sang that love would conquer fear, if people would to it surrender.

And said that this Leader would learn his lesson, in this world or another.

And then the hat flew us once more, to another unknown place,

The sun shone on mists of white that sang, sweet music in our ears.

Suddenly, in the blink of an eye, the hat had dropped us at my door.

Burt and Bella looked at me, and cried, “No hate, no more!”

Burt said he would no longer fight, with every tom he saw.

Bella cried that she would stop, her mad barking at every dawg.

Me? I thought, “What can I do?” before I realized,

I would stop making fun of my human (well, at least I could give it a try).

Someday we hope to find again, the hat that travels the sky.

And it will take us to another place, where we might laugh or cry.

At least these adventures would help us, remember who we are,

Well, folks, that’s it. Now I have to go pray to The Great One (yes, there is one cat greater than I). I have to ask for help with not making fun of Emily. But gee, she is so easy, it’s gonna be hard to stop. Maybe, instead, I can just add in additional love bites? That will let her know that, just because I’m poking fun at her, doesn’t mean I don’t love her.

30 thoughts on “Zoe and Friends: One Strange Adventure…”