Hello, Chris thanks for inviting me to talk about myself on your blog.

I came to write this piece and froze. Thoughts of “my mind has gone on holiday” and I’ve forgotten how to string a sentence together”, invade my mind. However, as with every story there is a beginning, middle an end.

I was brought up on an island called Rousay. It forms part of the chain of islands called the Orkneys

My uncle owned a farm and my aunt was the district nurse, but that simple sentence is bare. It doesn’t tell you about them or just what they did for me.

My uncle Tommy was, in my eyes, a magician. He taught me how to bond with animals, how to drive the tractor, the land rover which left us with some hysterical memories. He taught me how to shoot at cans with my Diana air rifle and how to tie excellent knots. He was also a story teller. His eyes would shine when telling me about Trows (Trolls), Faeries, Vikings, Witches, Selkies and Finn folk.

We had a field at the side of the house with a Knowe(Mound) in the middle. Tommy said it was a “Trow Knowe” and never ploughed that field. To disturb a Trow was to be cursed.

Now you can see where my creative imagination began.

Adeline, my aunt and my mam. She read to me at night, soothed my nightmares away with practical advice. A ring of salt around the bed, it works. She held my hand through every stage of growing up and believed in me and all the tales I would come to her with.

I was encouraged by all the people we were close to on Rousay, including our primary school teacher. Creatively my imagination was allowed to run free at home and at school.

Religion played a part of course but although influenced by the Catholic faith I was allowed to develop my own views of religion.

I was about seven when I said to Adeline: “Sorry Mam but reincarnation is true because God wouldn’t make a new soul every time that would be wasteful.”

So amongst these amazing people I was nurtured, allowed to grow like a wild flower and taught ancient tales.

Unfortunately we left Rousay and that idyllic life behind us and settled in a small fishing town in Morayshire called Lossiemouth.

As a teenager I was full of the need to change the world. My friends and I were punks first then slid into being goths as the music scene changed with us. 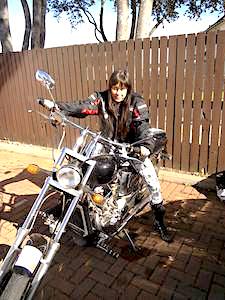 I had a variety of jobs. I worked in a bank, as a barmaid, a waitress, a tarot card reader, a healer and a seamstress.

Through all of this I continued to write and sent manuscripts off to agents and publishing houses. These were pre J K Rowling days and my tales of selkie shape shifters were rejected. I never gave up and my novels in the Suleskerry series are still my babies and waiting to be published.

Times changed and amazon and e-books exploded and rocked the literary world.

By this time my health made it impossible for me to work. I have functional neurological disorder and also have mental health disorders.

I realised that although I could not work physically, I could devote time to my life long passion of writing.

The learning curve is steep but enjoyable. This journey would not have been possible without the help and support of my loving wife, my daughter, friends both offline and online. Blogs are my textbooks and bloggers my teachers.

As to where the journey will end? I’m not sure. I’m still at the beginning.

My first published book Wisp is now live and that is a wonderful thing that I once thought would never happen. It is a detective, murder, dark fantasy, love story, and set in a world that I built.

Hobbies? I crochet totally eclectic weird dolls. They don’t look weird to me but then I do have a different perspective on weird.

Thanks for taking the time to read this and to Chris for hosting.

Here are the links to Wisp and my pages.