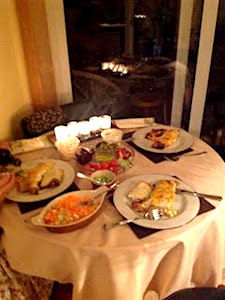 In this, the fourth and last article on the topic of Food in Fiction, I thought I’d let you into a badly kept secret.

Having been married since forever and having brought up a family of five, I can cook – but I wouldn’t say I was good at it. Perhaps that’s why none of the main characters in my novels have been great cooks. I’ve had my share of disasters too, though not ever on the scale of Hugh’s in my WIP, For What it’s Worth.

By the time she turned into the communal stair of the flats, Sandra had built up a fair head of steam in her boiler, fuelled by the indignity she suffered at work set against the memory of Hugh lying warm and sleepy in their bed when she left him this morning and sitting with his feet on the coffee table all day watching day-time trash on the unlicensed box, as she imagined he had most of her long, torturous day. ‘Sauce for the goose…’ Colleen’s remark flared in her memory. ‘Equal opportunity…’ She was ready to blow.

A blanket of fresh, enticing, foodie smells doused her anger as she opened the door.

Sandra still had her key in the lock, the door still standing open, the sudden cooling of her anger leaving her frozen in disbelief.

“Guessed it must be about my turn,” Hugh planted a kiss on her cheek as he busied past her with candles for the table.

“But you never cook. You hate cooking.”

“I didn’t say that, or not exactly. It’s just that…” he ran his hands through his floppy hair, pushing his swimming goggles onto his forehead. “It’s just that you do it so much better. Onions,” he added in answer to her unspoken enquiry about the goggles.

“Yes, I see. But the candles, wine?” She closed the door and followed him through to the living room.

“A sudden pang of conscience. You out there every day working for us. Me in here watching tele.”

A weary snort of recognition escaped from Sandra.

“One of these interminable talk shows. ‘Is your man a loser?’ Suddenly saw that, yes, your man, me, was… am… a bit of a loser Wouldn’t be watching that dreadful program otherwise. Decided to do something about it.”

“Yes. Yes, I suppose that would be nice. The ideal really, I imagine.” Hugh stood with his hands on his hips, his hips girded with a tea towel, nodding his agreement. “Meat on the table, yes, see what you mean.” He sniffed the air, “Sorry, back in a mo. The meat. Need to do some stirring.” And disappeared into the kitchen.

“Don’t come in,” he yelled as she started to push open the kitchen door.

“Oh good grief, what on earth is all this for?”

“I told you not to come through.”

“How many are you expecting for dinner?”

“But there’s so much. All these peppers.”

“I thought it seemed a lot,” he frowned. “But that’s what the recipe said.”

“Which recipe? Let me see.”

He lifted the book to show her.

He took the recipe back and pointed to the ingredients list. “Look, six chicken breasts, fourteen oz of potatoes. Oz, I knew that was ounces,” he informed her with some pride. “And I knew sixteen ounces equals one pound, so I weighed out nearly a pound, then half as much of peppers, same of mushrooms.”

“But I don’t have ounces on my scales.”

“Grams and Kilos,” she showed him. “It measures in grams and kilos. You’ve cooked a kilo of potatoes, four chicken breasts and there are several kilos of vegetables chopped up here.” The sweep of her hand indicated the heaps of vegetables covering every available work surface in their little kitchen. “For two of us.”

He scratched his head. “I wondered how it was all going to fit in the wok.”

“Well, it’s not, is it?” she said, weariness giving an edge to her voice.

“No, I suppose it’s not. Sorry.” He shrugged his apology like a child caught in some minor misdemeanour. “What… er… what do you… er… should I…”

Sandra sighed. “Let me get my coat off. Oh Hugh,” she said, drawing him into her arms. “What are we going to do?”

“I thought, perhaps, eating might be a good idea?”

In Flying Free, my third novel, the main character, Jayne, is a young working woman, still living at home with her mother, who does most of the cooking. When her mother isn’t home, Jayne cooks simple food, often served with salad and crusty bread. She enjoys dining out, especially with friends, but has neither the time nor the inclination to cook anything very ambitious. From time to time, if her mother is working late, Jayne might cook for her coming home, a casserole or her version of Quick’n’Easy Chilli Con Carne perhaps.

In Here At The Gate, Mhairi, the main protagonist, has been married for a long time, brought up two children and cooked many meals. Like me, she is an everyday sort of cook: plain cooking, no frills, just good wholesome food adequately cooked. A good roast on a Sunday, with plenty of vegetables and roasted potatoes, rounded off with something like apple pie or crumble. Comfort food.

Just as there are many novels that feature food, either playing a leading role, a subsidiary part or setting the scene, there are many more where food is never mentioned. And perhaps it is not mentioned in your own writing, but that doesn’t mean as part of the process of getting to know them, you shouldn’t decide what your characters like to eat and where they like to eat it. They’ll be the more engaging for it.

Except where otherwise noted, content on this site is licensed to Christopher Graham (aka, The Story Reading Ape), under a  Creative Commons Attribution-NonCommercial-NoDerivatives 4.0 International License.
Join 15,680 other subscribers