Hi, I am originally from Germany, and after years of bathing in the buzz of big cities I now live in the UK countryside (up the hill and then left into the woods). I am an avid reader, runner and dog lover. Me and my partner have three labradoodles and breed them. We are expecting another litter in June, our fourth, which should be great fun. I used to travel for a living but now I am very domesticated and grounded. I guess you could call it a midlife crisis in reverse which made me settle down.

I always imagined writing to be very boring and was content just reading other people’s work. Then one day I had an idea and wrote it down as an experiment. I rather enjoyed the process and kept going. My first published book, “The Luck of the Weissensteiners” is historical fiction; it was the result of family research and inspired by speculation about what might have happened to my ancestors during WW2.  My new book, “Time to Let Go” is about Alzheimer’s disease and its effect on family dynamics. Memories are your history and what makes you ‘you’. Losing them is like becoming someone else. I wrote about it because it both fascinated and frightened me and writing is a great way of reflecting on something.

I self-published to ‘test’ the market and get responses from readers unconnected to me; I also did not want to put myself through a series of rejection letters and demoralising experiences. I appreciate that publishers and agents are inundated with offers but for authors the system sucks. Since then, I have negotiated with some smaller publishers but I decided not to sign with them. I quite enjoy being my own boss and publisher for now.

“The Luck of the Weissensteiners” is a WW2 drama set in Slovakia between 1933 and 1946 and is about the unstable ‘luck’ of a Jewish family and their friends in this newly formed state (1938). “Sebastian” is set before and during WW1 in Vienna and shows the struggles of the crumbling Habsburg Empire through the eyes of a family with their own personal problems. “The Black Eagle Inn” is a family saga set in Germany after WW2 and chronicles the rebuilding of a shamed Nation by using one seemingly unaffected family as an example. “Time to Let Go” is a contemporary family drama about family dynamics and Alzheimer’s disease.

The Luck of the Weissensteiners (Three Nations Trilogy Book 1)

In the sleepy town of Bratislava in 1933 a romantic girl falls for a bookseller from Berlin. Greta Weissensteiner, daughter of a Jewish weaver, slowly settles in with the Winkelmeier clan just as the developments in Germany start to make waves in Europe and re-draws the visible and invisible borders. The political climate in the multifaceted cultural jigsaw puzzle of disintegrating Czechoslovakia becomes more complex and affects relations between the couple and the families. The story follows them through the war with its predictable and also its unexpected turns and events and the equally hard times after.
But this is no ordinary romance; in fact it is not a romance at all, but a powerful, often sad, Holocaust story. What makes The Luck of the Weissensteiners so extraordinary is the chance to consider the many different people who were never in concentration camps, never in the military, yet who nonetheless had their own indelible Holocaust experiences. This is a wide-ranging, historically accurate exploration of the connections between social location, personal integrity and, as the title says, luck.

In Amazon – In Barnes & Noble

Sebastian is the story of a young man who has his leg amputated before World War I. When his father is drafted to the war it falls on to him to run the family grocery store in Vienna, to grow into his responsibilities, bear loss and uncertainty and hopefully find love.
Sebastian Schreiber, his extended family, their friends and the store employees experience the ‘golden days’ of pre-war Vienna and the timed of the war and the end of the Monarchy while trying to make a living and to preserve what they hold dear.
Fischer convincingly describes life in Vienna during the war, how it affected the people in an otherwise safe and prosperous location, the beginning of the end for the Monarchy, the arrival of modern thoughts and trends, the Viennese class system and the end of an era.
As in the first part of the trilogy, “The Luck of The Weissensteiners” we are confronted again with themes of identity, Nationality and borders. The step back in time made from Book 1 and the change of location from Slovakia to Austria enables the reader to see the parallels and the differences deliberately out of the sequential order. This helps to see one not as the consequence of the other, but to experience them as the momentary reality as it must have felt for the people at the time.

In Amazon – In Barnes & Noble

The Black Eagle Inn is an old established Restaurant and Farm business in the sleepy Bavarian countryside outside of Heimkirchen. Childless Anna Hinterberger has fought hard to make it her own and keep it running through WWII. Religion and rivalry divide her family as one of her nephews, Markus has got her heart and another nephew, Lukas got her ear. Her husband Herbert is still missing and for the wider family life in post-war Germany also has some unexpected challenges in store.

Once again Fischer tells a family saga with war in the far background and weaves the political and religious into the personal. Being the third in the Three Nations Trilogy this book offers another perspective on war, its impact on people and the themes of nations and identity.

Time to Let Go is a contemporary family drama set in Britain.
Following a traumatic incident at work Stewardess Hanna Korhonen decides to take time off work and leaves her home in London to spend quality time with her elderly parents in rural England. There she finds that neither can she run away from her problems, nor does her family provide the easy getaway place that she has hoped for. Her mother suffers from Alzheimer’s disease and, while being confronted with the consequences of her issues at work, she and her entire family are forced to reassess their lives.
The book takes a close look at family dynamics and at human nature in a time of a crisis. Their challenges, individual and shared, take the Korhonens on a journey of self-discovery and redemption. 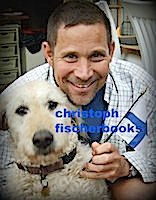 Christoph Fischer was born in Germany, near the Austrian border, as the son of a Sudeten-German father and a Bavarian mother. Not a full local in the eyes and ears of his peers he developed an ambiguous sense of belonging and home in Bavaria. He moved to Hamburg in pursuit of his studies and to lead a life of literary indulgence. After a few years he moved on to the UK where he now lives in a small hamlet, not far from Bath. He and his partner have three Labradoodles to complete their family.

Christoph worked for the British Film Institute, in Libraries, Museums and for an airline.. ‘The Luck of The Weissensteiners’ was published in November 2012; ‘Sebastian’ in May 2013 and The Black Eagle Inn in October 2013. He has written several other novels which are in the later stages of editing and finalisation.

Find out more about Christoph by clicking the following links:

Authors Page – The Luck of the Weissenstieners